Going to MK Xscape on Saturday reminded me why we don’t ride there on a regular basis, rude reception staff, non-working poma lifts and slow sugar snow attempted to spoil the evening. I was there for the Burton Black Metal jam and I think all the riders were in agreement that it would have been much nicer if we hadn’t had to hike the park for the majority of the evening. It’s one thing hiking when you’re away and the park isn’t serviced by a convenient lift, but when you’re indoors and are paying Â£35 for the pleasure of using the slope you expect everything to be in good working order so you can take it easy and plan your competition runs.

That aside it was a good night, I tested my new pants and was mightily impressed, nice cut, baggy enough to cope with my ass and my padding plus I like the colour!

There was a good mix of riding styles and it was nice to see Laura Berry back where it all started for her, riding super-smoothly all night she carried away first prize, not bad at all considering she was riding with a broken wrist. The menâ€™s comp was won by local ATV rider Paul Rennie and as ever this has caused some controversy as can be seen from the SCUK forum. Comps always cause people to feel hard done by, the right person never seems to win and everyone can always judge better than the judges, I guess it’s like football and every viewer being a referee in that respect.

I certainly wouldn’t have wanted to be a judge in the men’s comp, everyone was riding really well with a real mix of tricks and styles being thrown down so I’m sure that it was a pretty close call between them all. Anyone interested in the winning runs can find the descriptions here.

I have to admit that having probably ridden my best runs ever I was a bit gutted not to make the final but the other girls were pushing it that little bit further, good tricks come with experience and at the moment I just don’t have enough of it. Still it gives me something to work on and push for in two weeks time at the Tamworth leg. 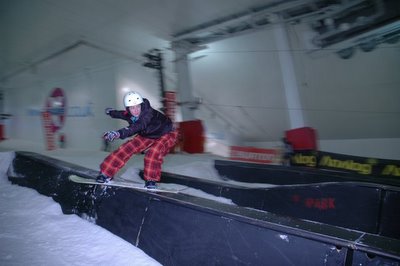