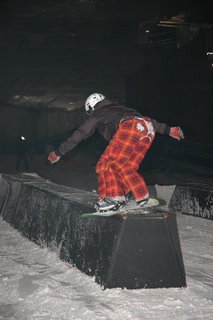 Saturday was the last leg of this year’s Burton Black Metal series so I headed up to Tamworth on a 270 mile round trip (although this was made easier by lift sharing with Dunx from SCUK) so I actually only had to drive 90 miles. The snow was the slowest I’d ever ridden at Tamworth so a lot of people were struggling to get on the rails at all let alone get some decent tricks nailed. I made the final but not the super final….basically I rode pretty well in the first half but pretty crap in the final, although I did nail a few frontsides on the kink and straight box, even managing to ride out switch (this is a new trick for me having only learnt it the week before so I was pretty stoked). The girl’s comp deservedly (IMHO) went to Kate Scott, beating Burton’s Posy Dixon into second place. Kate rode really well all night with bags of style and was unbelieveably stoked to nail the fs on the c-box that she’d been trying all night.

It was also good to see some local lads make it to the final and place as well with John Weatherley and Robin Mann coming 3rd & 2nd in the final and Joe Sandy coming 3rd in the Super Final…well done guys! (and well done to Ben Hitch who made the final but didn’t place)

As for Sunday, we were supposed to be heading to the Red Bull Rail Storm, I’d frantically crocheted Laura Berry 2 beanies and we left at 2pm to do a 35 mile journey…….3 hours later we were still stuck in traffic and we decided to turn back. I heard it was good though!

It does concern me though that I was unable to get there on a quiet Sunday, I dread to think what’s going to happen when we host the Olympics in 2012…..I have a feeling that I won’t be able to get anywhere as the roads cease up and visitors clog public transport (that’s if it’s running and not shut for engineering works!). Hopefully by then I’ll have moved far enough away that I won’t be affected.