Having had to decide between two snowboarding competitions this weekend (Burton Scrap Metal at Castleford & the Westbeach Snowflex Freestyle Championship in Noeux Les Mines, France) I knew Iâ€™d made the right decision the moment we arrived in France! Not only was the slope closer than Cas but 3 times as long. It wasnâ€™t my first visit, but viewing the slope in the distance as we drove through the town reminded me of itâ€™s greatness, and made me feel the pain that thereâ€™s nothing to rival it in the UK.

Another added bonus was the fact that I could ride for 4 days for Â£20 as opposed to 4 hours for Â£30! Even with the hotel and tunnel ticket it worked out to be a cheap trip away.

The riders (& skiers) started to arrive from lunchtime on Thursday and we all hit the slope for a practice. There are 3 sizes of kicker at NLM, small ( a mere roller/bump in the slope), medium (apx 5ft high) and then way too big for me to hit (2.5m high). My mission for the trip was to work on my spinning and although the kicker was the biggest Iâ€™ve hit yet Iâ€™m pleased to say that I managed a few FS180â€™s and nearly a FS360. 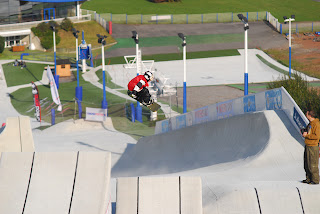 The comp itself was on the Saturday and there were entrants from Scotland, England, France, Spain, Holland & Japan! I think there may have been a few other nations represented as well but I canâ€™t be sure, there were plenty of people there and it was hard to keep track of them all. It would have been even busier if some other sporting event meant that all the ferries & trains to France werenâ€™t booked up as I know a few people whoâ€™d left booking until the last minute couldnâ€™t get over the channel.

With the slope running well there were competitors flying off all 3 kickers, including in the team event 2 riders from â€œTeam Trueâ€ holding hands as they went off the mid-kicker at the same time! It was probably the best display of riding Iâ€™ve seen with spins, flips and the odd slam covering all axes of rotation, a round of applause has to go to Terri Spencer for hardest slam of the day, I missed the trick (it was possibly a misty flip) as I was on the lift at the time but she fell onto her side from at least 12 feet in the air only to get up and keep on skiing, winning the womenâ€™s ski prize with ease.

I do have to say thank you to the inventors of Snowflex (Briton Engineering), because believe me if Iâ€™d slammed like I did on the Dendix diamonds of death my elbow would have been twice the size and possibly even broken, as it was the graze is from the inside of my elbow pad and the foam springiness of Snowflex has meant that I survived to ride another day…..and to claim 3rd place in the over 16’s Women’s category. It was a fun day, 7 hours riding meant I’m still feeling the aches and pains now but it was well worth it to see everyone riding so well, supporting each other and fighting it out for top spot on the podium. 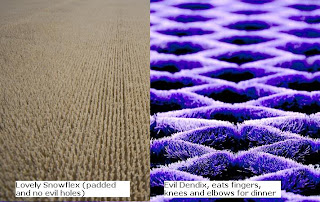 Thanks also go out to Wayne, Gary, Dee, Ann and everyone else involved in making this series of comps the most fun Iâ€™ve had in ages! Bring on next year!

More shots from the day can be found on