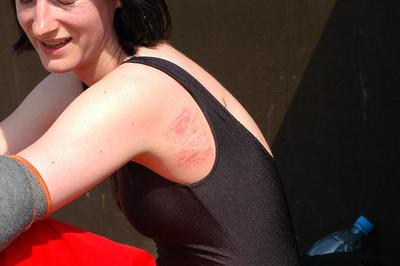 Well all my plans for the weekend changed when I got a call from “the Eurodaddy” on Friday night. Instead of our airbag session taking place on Sunday we were summoned to the slope for 1pm on Saturday afternoon, so after much deliberation we decided to put the idea on the Tamworth Bash on hold and hit the dry slope instead.
So Saturday afternoon saw us out in blazing sunshine, melting in the heat, it was definitely worth it though. Saturday was a big step for me, last time I rode the airbag about 10 days ago a had what you could term “a bit of a slam” for a visual description of what this is perhaps you should take a look at the following clips a bit of a slam & a bit of a slam – slow motion. As you can imagine I was a touch nervous that something similar would happen again (by a touch nervous I actually mean on the verge of being sick). On reflection I actually had a really fun afternoon though, I managed to land on the airbag on every occasion and it wasn’t until the end of the session that I aborted on the run in, fell over and ended up with a nice graze on my shoulder. At the time though it was all just a bit much, the nerves gave way to tears on impact and I decided to call it a day before I did any serious damage. On the brightside though I think I’ve got over the fear and am seriously looking forward to trying some new tricks on Tuesday. This clip shows just how fast I’m going when I get to the kicker.
The rest of my weekend was spent reading Harry Potter and the Half-Blood Prince. I have to admit that I was tempted to pop to the shops at 12:01am on Saturday to get it but resisted in the knowledge that if I bought it I’d have to read it and that would leave me tired and grumpy for the airbag session. Having finally bought it on Saturday evening I read almost constantly until about 2am when I realised I was too tired to hold the heavy hardback up anymore and decided to get some sleep, by this point I was completely engrossed and had read half the book. I finally finished it Sunday evening and although I won’t post anything about it’s content here I can heartily say that it’s a brilliant book. If you’ve read the others and enjoyed them then I suggest you crack on with reading this if you haven’t already!