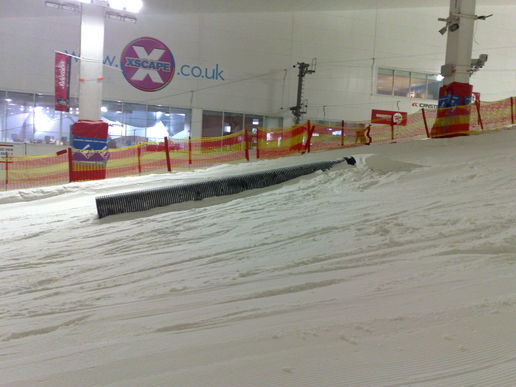 So we headed up to MK SNO!zone on Friday night, mostly because the slope plan showed a kicker on it, and seeing as how I have a Big Air competition in Glasgow on Saturday and need the practice we thought it’d be worth the trip up there.

As you can see from this Tweet, there was no kicker and I wasn’t too chuffed. Things got even worse for a moment when Emily, one of the regulars, mentioned that they weren’t going to be grooming the slope because the Cat (slope groomer) was broken. Luckily before I got changed and went to get my money back the Cat made an appearance and started to groom the slope.

So we were left with a rail session for the evening, not what I’d hoped for but when you’re travelled 75 miles and it’s taken over 2 hours you tend to make the best of things (or in previous instances head home for Chinese takeaway!).

I decided to continue building on the previous week’s progression and got straight on to the side on gas pipe. I didn’t have much choice if I’m honest as it was either side on or ride on gas pipes or a side on kink bench rail. Not much for beginners, but for someone looking to step things up a bit it was something to work on. I wanted to get as much out of the session as I could so once I’d warmed up on the side on gas pipe I gave the side on bench rail a try, now this is more tricky, although it’s flat in the top providing a better slide, it has space underneath meaning that if you don’t jump enough and your board gets trapped underneath it’s going to sting a bit!

Determination combined with the presence of some of the girls I regularly compete against meant I pushed myself more than I normally do and this resulted in probably the best trick run I’ve ever done….lip-slide tail press to switch on the bench to boardslide revert on the side on gas pipe followed by 50:50 to boardslide to switch on the ride on gas pipe! All pretty smooth and all ridden out cleanly.

Considering a week ago I wouldn’t touch a gas pipe through choice and could do side on rails in my head but not in practice I certainly feel that the practice and my new PMA are paying off, lets hope it continues that way because I’m convinced that with hard work and a touch of confidence I can keep things moving in a positive direction. We’ll see how things go on the kicker front this weekend when I head to Bearsden for the 1st leg of the Westbeach Snowflex Series! 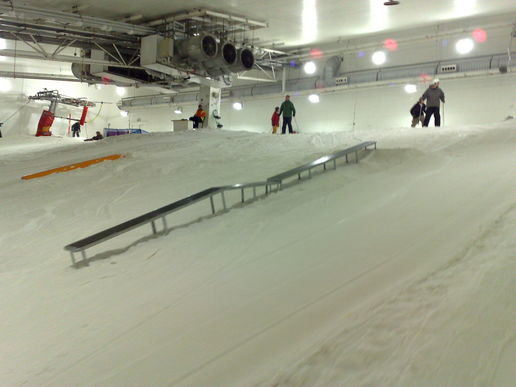