…..Saturday saw me at Tamworth Snowdome for the Forum Youngblood competition. Officially I was there to review the comp for SCUK, as this was an under 19’s event I was being pushed to the sidelines to make way for the youth of snowboarding. It was actually an excellent event Jon Weaver, Forum Snowboards European Team Captain started the evening with a free BBQ and MC’d the event keeping the riders moving and getting everyone to push themselves to win the throw down prizes (us old folk were allowed to win these too). I spent the night demo-ing a new Jeenyus Rentals board, I have to say I love this board and have no doubt I’ll be buying one as a mini jib stick shortly!

The overall comp was won by a guy who made the trip from Holland purely to enter, he rode really well and it made it a worthwhile journey for him. From my point of view the evening couldn’t have gone better, not only did I win some T-shirts and a bag in the jam session I was awarded the prize for being too old to enter but still riding really well in the girl’s section so took home what would have been the 3rd place prizes :o)

All in all a good evening so well done to Jon from Forum (and his little gang of helpers), Stu, Lee and the Tam slope staff and all the riders!

Thanks also to Paul for getting a snap of my on the rail rather than me face-planting off the box! 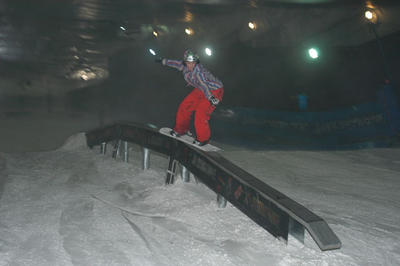