…..when you get excited that the menu in your regular hotel has changed!
I have to say that even though I’ve been staying in this hotel since mid-August last year for at least 2 nights a week I’ve been very impressed with their menu. It last changed in about October/November time and is extremely varied, not only does it have a large number of dishes on it, it also offers a third of the menu in 3 different sizes. Which is great if you fancy mixing and matching lots of nibbly sized plates, or if you’re watching your weight (which after 18 months of hotel eating you need to do!).

The problem I know have is getting to know this menu, gone are my old favourites of Halloumi cheese and asparagus and winter berries with a Cointreau Sabayonne but in is a greater variety of salads and scallops with cauliflower puree rather than sitting on black pudding (which always put me off ordering them). At least they still have my preferred glass of wine!

So dinner tonight will take a bit longer than usual because I actually have to read the menu first, still they do say a change is as good as a rest, and after today’s meeting I think it’ll be a while before I get any rest! Well excluding the fact that I’m off to Laax for two weeks from next Friday that is ;o)

Update:
So here’s what I had tonight.

Seared Scallops with cauliflower puree and a citrus and chive emulsion 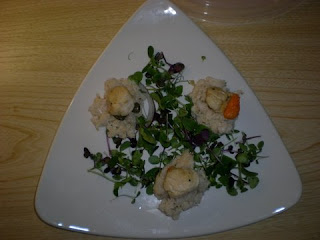 This is not going to be a favourite, the scallops were tough and the cauliflower emulsion (!) wasn’t that tasty! 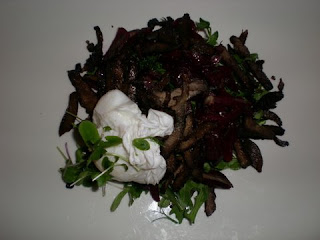 This wasn’t too bad, although the duck was more dried that crispy. The poached duck egg was tasty though. This probably falls into the would eat again bracket but I’ll wait until I’ve tried some of the other salads before it becomes a regular choice.

Finally I had the Rhubarb Brulee with pina colada ice cream and a natural yogurt shot! 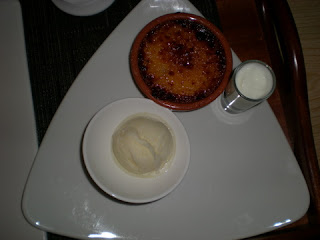 This was actually very tasty indeed, the ice cream was nice and you could taste the coconut and pineapple and the rhubarb brulee was really nice with decent chunks of rhubarb and wonderful crispy sugar on the top. The only down-side was the yogurt shot, my spoon was too big to fit in the shot glass and it was too thick to pour (or shake) out. Still who needs yogurt when you have ice cream?