Last weekend was Endure24, a 24 hour race in Wasing Park, Aldermaston and my first 24 hour event as a solo runner.  I had entered the race as prep for next month’s 100 mile run at Samphire Hoe, and it was never my intention to run the full 24 hours, it was more to be a test event and one in which I ran through the night as practice to ensure I could stay awake throughout the dark section of the race.  As the race got closer I shifted my plan from sitting around from race start until sunset, then running through the night and stopping to a plan I hoped would give me some options for Samphire 100.  Instead I planned on walking the daylight section, before transitioning to running at night.  As I am not a fan of hot weather it is a worry for me that the 100 will be on the hottest weekend of the year and I will melt.  I wanted to see if I could manage to walk for a significant time and then pick up the pace so that I have some options available to me if required.

We rocked up to the park on Friday in order to get a good spot in the solo area and check the new tent worked.  It did! Speedily pitched and new tent neighbours impressed we were up and in place.  We spent the afternoon chilling in the tent, recce-ing some of the course and then escaping to the relaxed and comfortable hotel I had booked up the road!  One thing I was sure of was that I wanted to be fully rested when the race started, not grumpy from an uncomfortable night in a tent.

We returned on Saturday morning, around 6:30am complete with McDonald’s (breakfast for me, Egg McMuffins on hold for Jools mid-race), and two cool boxes filled with ice from the hotel’s ice machine….total win as it meant I had no need to hit Sainsbury’s for ice on the way to the race.  We then proceeded to get set up and then dozed a bit.  Two cool boxes for drinks (& cheese and marmite rolls, cheese and pickle for Jools) and then a wide selection of food to munch throughout the race.

My final plan for the race was walk from the start until 8pm when head torches would be required, try and pick the pace up to a run and keep going until daybreak.  We headed to the start for 12pm, I made sure I was near the back and we were off!  I am a pretty fast walker, and I wanted to make sure that I was attacking the race with more of a power-hike than a dawdle.  The laps were 5 miles (8km) long, and that meant that I would have to complete 6 laps & 30 miles for this to count as a marathon in race terms.  The course was a nice mix of undulations, anything remotely like an up-hill would be walked even in the latter stages of the race, but I could see some bits that would be lovely for running on once I picked the pace up.  I also wanted to try and keep my “aid station” stops to a minimum if I could, although I had also said I would help crew the Boyf if needed so was planning on being quite flexible on timings.  I got laps one and two completed in 1:08:12 and 1:10:03, not bad at all.  After my second lap I stopped to pick up my poles.  I wanted to try them out before I was too tired to work out how to use them, just in case I did want to use them in the night.  They do take a bit of getting used to, but they are brilliant on steep up hills.  Overall they slowed me a little, but I can see that when you aren’t moving at too hiking pace, or the terrain is tougher then they would be brilliant.  I dropped them back at the tent and was planning to double-up the laps again to go direct to lap 5 without a stop but then I got a crew request from the Boyf and stopped again after lap 4 to do a water bottle top up for him.  I did the same after lap 5 and then headed out on lap 6 still moving really well and without any real pain or issues. I completed my 6th lap, and 30 miles in 7:49:02, ahead of the 8pm cutoff for collecting head torches.  Considering the extra time I had taken on crew/aid station stops I was happy with this and then decided to take the time to change clothes and socks before heading out into the dark and seeing if I could run.  My feet felt OK, I put more Gurney Goo on them and a fresh set of socks, but should probably have paid more attention to a small hot spot/blister that had formed under the rear of my left arch.  It didn’t look like a problem though so I stupidly ignored it. 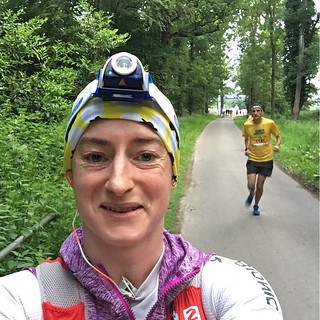 Head torch on and I was off out for the next 5 miles.  I walked the long, gentle hill and then transitioned into a run walk strategy.  It felt good, I had a fairly fast pace and nothing really hurt.  I put in a fastish lap time and then went out for another one.  It was here that it all started to go a bit wrong.  I started to feel quite sick everytime I picked up the pace, and my foot started to notice the blister.  Shortly after 11pm I decided to visit the First Aid tent and get it looked at.  Drained and bandaged I was soon back out, but the nausea wouldn’t shift and I was constantly needing to stop for the loo.  I was walking more than running, but I was still moving forward.  The key thing was to keep moving until sunrise and see how far I could get. I finally reached the 50 mile point in 14:52:56, I was still moving OK and my bandaged foot was mostly pain free but I was feeling every stone and surface transition, tiredness was setting in but I knew it would soon be daylight.  I did another clothes swap, this was an essential one as I had managed to get sawdust all over my bum and shorts (it was used to “flush” the loos out by the water station) when I was rushing on another wee stop and it was itching like crazy.  I decided sawdust chafage was not going to be pretty and was grateful for clean leggings before heading out into the unknown of “beyond 50 miles”.

I walked what was to be my last lap with the Boyf, collected a third hug from Paul Spooner & his fellow marshal Nick, and then chatting to Alex Penny.  Sunrise came and I decided that enough was enough, I had made it through the night, seen I could pick up the pace after walking a while, and couldn’t see any benefit to putting extra mileage in my legs. We did ponder going out again but in the end decided we had done what we had set out to do.  Shortly after I had crawled into the sleeping bag I heard the rain start to fall…..totally stoked to be in the tent and not halfway round the course!

What did I learn?

Click here for Garmin stats if you can’t see them below: 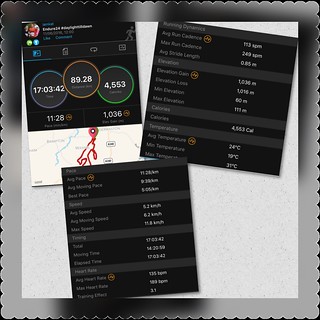 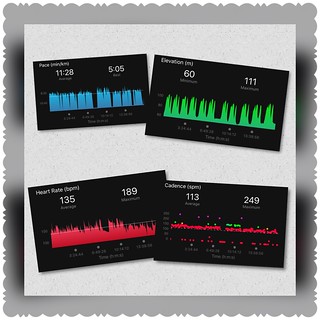