Things are out of sequence, work is crazy, running has occurred and blogging pretty much hasn’t.  Suffice to say it is once again “catch-up” time. 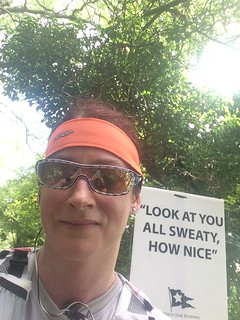 First up was the Giant’s Head marathon, held on 27th June, last year we were signed up to do the 10km (ish) Sydling Hill race which runs on the same day but had to skip it due to the Boyf being broken.  This year we decided it would be a good idea to do the marathon.  It was both a good idea and a bad one!  The team at White Star Running are nuts (they produced my brilliant Sloth t-shirt…..I now also have a vest and a pink version!)….the courses are crazy and they throw in little amusements like crazy signs, naked farmers and “Love Stations”.  You don’t do one of their races if you are looking for an easy time of it that’s for sure! It was good to see @JovialGnome at the start, but unfortunately for him it wasn’t to be the best of days and he decided the sensible option was to call it a day at the half way point.  I was slightly out of sync with things, almost forgot to put my sun glasses on and couldn’t find the bag drop point (it was at the finish not the start as I had been told).  Bag was flung to a friendly marshal who said they would drop it off for me (as it was nicely tagged) and we were off, launched into action by a horse-riding hunt-horn blower. 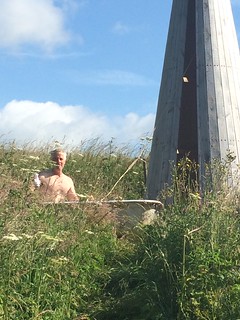 A steady start wound us passed the naked farmer (in a bath, ringing a bell) and towards the first hill….where the majority seemed to decide walking was the best approach.

Onwards we went, there was running and there was walking, the aid stations were well stocked (watermelon, mini sausages and cherry tomatoes were all on my grab list) and the views were amazing.  What I struggled with a bit was the heat, I pushed on though and really tried not to let it get me down.  Plenty of water refills, Nuun and S-caps kept me going, as did my trusty water soaked buff.  To be honest things were pretty good up to the 20 mile point, where I very nearly got pulled due to the redness of my neck and legs.  Not sun burn, but a rather nasty heat rash.  I convinced them I was all OK, grabbed a cider (obviously!) and pushed onwards.  I was running on my own and was definitely in hike/run interval mode at this point but the race was going on forever.  After a brief text exchange with the Boyf to let him know his PS4 had been delivered to the neighbours we were back to radio silence, and I started to worry.  Had he finished? Why hadn’t I had the RunKeeper alert to say he was done yet? Was he OK? Was the course hugely long? (One graphic pre-race had showed it as 48km!)  Was that emergency helicopter for him? 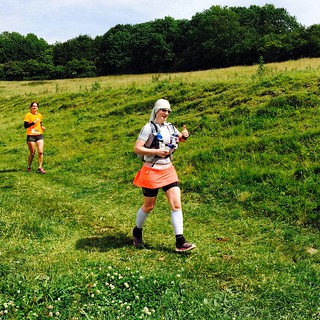 In short, yes he had finished, no he hadn’t got mobile signal, yes the course was long but not that long!  2km from the end I heard from him, just at the point to confirm the road marshal wasn’t lying about how far it was to the finish.  I sprinted past him as he’d come part way up the hill to grab a photo of me, but didn’t realise until we were level and by then I was too determined to get it over with…..finally I was there, job done and marathon number 5 completed in 6:51:11.

A fun, but very tough race, conditions underfoot weren’t great at times (the flint road of hell was not fun!), but overall I really enjoyed it and would consider doing it again in future. 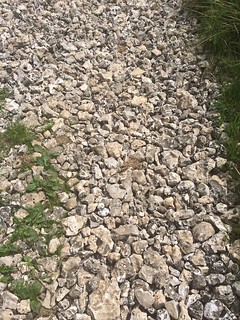 You can check out all my photos from the day here.

And my Garmin stats here (if you can’t see the embed below):