Saturday 18th July saw the Boyf and I back in Dorset for our second White Star Running marathon of the year.  We headed down the night before and managed to get a good night’s sleep in the local Premier Inn.

The Dorset Invader was billed as being a bit easier than the Giant’s Head but I wasn’t expecting easier to equal easy, and that’s probably a good thing as I don’t think White Star do easy!  On arrival we got our numbers sorted and managed to catch up with our friend Branny who was there to do the half marathon with one of his work mates.  You can find out how he did here.  We also spotted parkrun pal Chris who was going to be running the half as a Roman God and stopped for a quick photo with Philip (another SVN addict)

We walked up the hill to the start, where photos were taken of the crazy bunch that were running in fancy dress and we were given some background on the race and a briefing of the course….the Love Station would feature twice….woohoo!

The race was started by a Roman Centurion on horse-back.  We were off down the hill and I was faffing with my Garmin! I had started it in “indoor run” mode, which let’s face it was not going to be helpful.  Garmin sorted (I thought – I realised later my Bluetooth was off so no heart-rate was recorded) we were off at a steady pace, the Boyf running with me for this race to get extra time on his feet.

We set off well, I felt pretty good and The Boyf even commented that I was looking fitter & more comfortable than when he had run the Coniston Marathon with me in early June.  I was running where I could and power-hiking if it was a bit steep or if the under-foot conditions were too tricky to fully get into my stride.  Whilst easier than Giant’s Head it was still quite a tough race.  Especially difficult for me were the runs along the edges of the fields.  It was quite a hot day, and I suffer when exposed to the sun so I was really struggling for about half of the race.  The Boyf kept me going though.  We were pretty slick at the aid stations, water refills, Nuun dropped in, grab water melon and get going was the order of the day.  Overall we only spent 10 minutes standing around, which considering there were about 8 aid stations is much better than my previous aid station activity.

About 35km I was really feeling it, however failure was not an option.  Or as the Boyf put it “I am not death marching 7km to the finish, get a wriggle on”!  It turns out that we were going up a hill at the time so I feel justified in my power-hiking, but I did pick it up and we moved into a run/walk mode.  I think I surprised him in the last stages as we hit a section that was in the woods (ah coolness!) and slightly downhill, so I was off.  He had been keeping an eye on time but hadn’t been pushing me towards an end goal….I too had been keeping a sneaky eye on things and it looked like we were going to beat Coniston’s time if I could keep things together.

Finally exiting the woods we were greeted at the top of the final hill by a cheery volunteer ringing a cow-bell.  The end truly was in sight, and with the encouragement of the Boyf I was off like a rocket.  I do love a sprint finish, but downhill sprints are even better.  Down the steep hill, through the gate and the finish arch was in sight…..there was time to do it, all I needed to do was keep my legs moving.  Done! Trail marathon complete in sub6! Official time 5:59:03! So happy!

It was a lot of effort and there was a point when I could easily have given up, but the support of the White Star Running volunteers, friends like Karen (running her 13th marathon in about 20 days) and the Boyf kept me going.

Another brilliant medal added to the collection along with a goody bag with jam and a Dorset Apple Cake muffin…..winning! 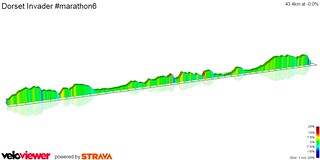 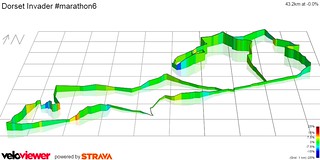 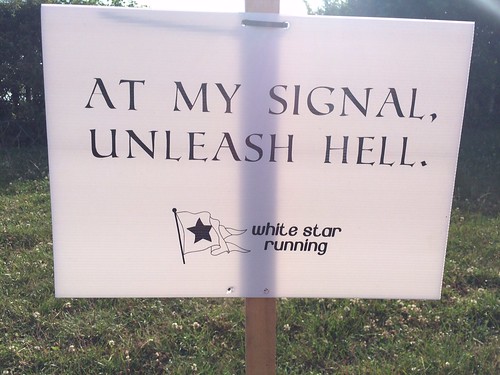