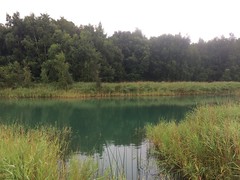 Bank Holiday Monday dawned for what should have been the first Cakeathon event put on by Saxons, Vikings & Normans, it wasn’t though, it was the second.  Due to an overwhelming sign-up when this event was first announced they had taken the waitlisted runners and run an event in May to accommodate them all rather than have them miss out.  The great thing about SVN is they keep event numbers quite small, it makes for a good atmosphere and reduces over-crowding at the cake station. Weather reports were for warm, slightly overcast weather…..what actually happened was a typical Bank Holiday torrential downpour 20 minutes before the race briefing followed by drizzle, thunder and mugginess throughout the race. 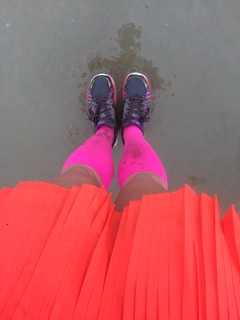 This was our first visit to the Betteshanger Country Park (Formerly known as Fowlmead Country Park) and it comprises of a trail mountain bike/walking loop around a tarmac cyclo-park track.  The Cakeathon was taking place on the trail course and despite the promise that this drained well and road shoes would be fine it seemed Traviss hadn’t considered that 20 minutes of torrential rain didn’t have time to drain, so I was glad to have my trail shoes on.  Road shoes would have been OK, but it was a bit muddy in places.

On the first lap I fell into step with the lovely Mel, Karen and Crustie, and in fact I managed to stick with Mel and Karen until the half-marathon point.  We all had a good old natter, chatting about Mel’s up-coming marathon (Thetford Iceni), Karen’s impending 100th marathon, and why it was that the guy in the big back-pack felt the need to use his run/walk strategy to run splashing through the puddles and then slam the brakes on once he had passed us until we over took him and he started to run again.  Splashy leap-frog seemed to be the order of the day! 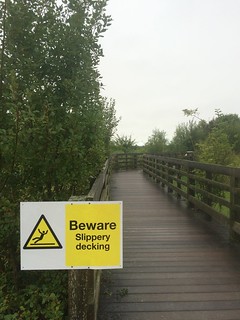 After lap 4 I needed to top up my flasks and grab some food, so I lost Mel & Karen.  The intention was to catch them up but I soon realised that I had over done things and probably hadn’t hydrated as much as I needed to.  I was getting very light-headed whenever I picked up the pace to I was back to that battle of getting rehydrated without diluting myself too much.  It was all a bit pants after that, I just couldn’t get back into rhythm of things and the laps seemed to get longer and longer.  Despite the drizzle it was still a bit warm and I think it affected me more than I was expecting.   I did mostly enjoy the race though, I was determined that I was going to keep going and I knew from my pre-race pace plans that I could make the marathon distance within the allocated cut-off time.  In the end I splashed my way round to complete my 7th marathon in a time of 5:58:04!

The medal for Cakeathon is huge!  In fact when the Boyf came in for the finish having done 11 laps we were worried that the weight of it in his tired state might tip him over….thankfully he had enough strength left to manage his medal and goody bag.

Another great run put on by a great team…..is it any wonder we have another 23 booked in already? 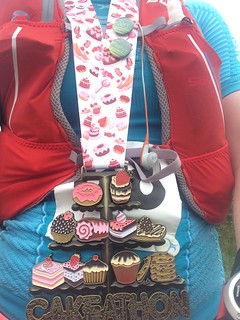 I just realised I completed this post without mentioning the cake….I was a bit focused on the day so I admit my cake-spotting was lacking but there were 3 tables of amazing cakes, some made, some bought but all shared and scoffed not only by the hungry runners and supporters but seemingly ever wasp in Kent!  Suffice to say if you did want cake on Monday you were in the right place for it.