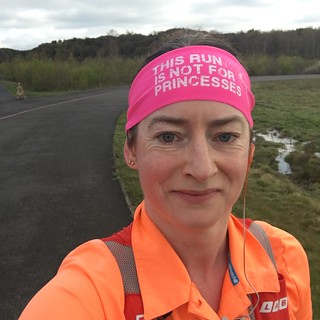 Saturday 16th April saw me set out to run my furthest distance yet, at the Fowlmead 50.  Another excellent event put on by Traviss & Rachel at Saxons, Vikings and Normans Marathons and Challenges.  What a challenge it was set to be, running 20 miles more than ever before, with a hard cutoff of 12 hours.  Now the cunning SVN team had softened the blow a smidgeon, if you failed to complete your 50 miles in the 12 hour time limit then they  would drop you down to the 12 hour challenge, and you would still get a medal and goody bag.  I didn’t want to resort to that though, my plan was to get to 50 miles, no matter what and if I finished in 11:59:59 then so be it!

I’d done my usual pre-race planning with paces and run:walk times in a spreadsheet and I was confident that it was doable, but you never know what is going to happen on the day, so I wasn’t too complacent.  My build-up to the race hadn’t been ideal, work has been crazy and I only managed to run 79km in March.  Thankfully the awesome TrainAsONE plan lets me get the most out of each training session so I still felt like I would be OK as long as I stuck to my plan and didn’t start too fast.

I had a plan and was determined to stick to it, or at least stick to it until I needed to tweak it, and then adjust accordingly.  My new Garmin Fenix 3 HR was prepped with my run:walk strategy, 4 minutes run: 1 minute walk, the start was announced and we were off. Garmin started and a nice gentle run up the incline from the start.  Initially I was running with Helen, she was planning on her first 50 miles as well but she was running to a different schedule, so after 4 minutes I slowed to a brisk walk and she continued on her 10:2 strategy.  We leap-frogged each other back and forth probably till the 10 mile point where I rewarded myself with my first loo break and she got ahead of me.  Unfortunately things didn’t go to plan for her, but she’s already signed up to beat the beast next year!  Helen, you were awesome, and it was lovely to spend some time running with you!

I had broken the race into 5 10 mile mini-races (this idea was totally stolen from the Boyf). No stopping at the aid station, eat and drink what I was carrying and only stop every 10 miles to replenish my mobile aid station.  Whilst the concept worked brilliantly I messed it up a bit by over drinking, a mistake I hope not to make again in the future, especially now I have read “Waterlogged: The serious problem of over hydration in endurance sports” by Prof Tim Noakes.

My legs were feeling good, but I was having some gurgly stomach issues and the over drinking also meant I needed more loo stops than I had planned for. Still you have to roll with the punches and at least I was on a lapped course with access to toilet facilities rather than having to hide behind a bush in the wilds somewhere.  My pacing strategy was working well but my heart rate was starting to climb and so I adjusted my run:walk on the fly, moving down to 3:1 for a while.

Oddly the laps weren’t bothering me, I was plugged in to an audiobook and was just focused on getting the job done, I started to lose some of the time I was ahead of plan but at no point did I feel like I was in real trouble. At this point I should confess I wasn’t pushing hard.  My goal was to get to the 50 mile point, finish und the 12 hour cut-off and have my legs feel like they could keep running.  This was not about me doing the fastest 50 miles I could, but about building my confidence ahead of my 100 mile race at Samphire in July.

Things did get tougher.  Soon I had passed the 30 mile point, and was now firmly in the land of the new.  I had never run this far or for this long before. It was all unknown and all I could do was focus on keeping moving and getting the job done.  I think because I was so focused on my pacing and my book that I didn’t really suffer any bad times in the race, I wasn’t in pain, I wasn’t that tired, I just knew that I needed to take it steady as my heart rate kept spiking and I could feel the stress rising in me when it did.

It was at this point that I got a nice surprise, the Boyf texted me to let me know he had done his 50 and was carrying on, and that we had a surprise visitor…..Louise had decided to pop over to support after completing her 250th parkrun that morning, and even more importantly she had cake!  It was so lovely to see her, and after a quick hug and refuel (apple cinnamon cake tastes amazing at 40 miles) I was off again.  Each lap she kept me focused and stopped me hanging around for long, you can tell she’s pretty good at this ultra running malarkey, no time shall be wasted eating or chatting…..or at least only if you are doing it on the move.

I knew by now that I was able to get to the end, and I just focused on moving forwards.  It was quite quiet out on the track by now, with most people having finished and so it was lovely to have the opportunity to run with Fiona for some of her final lap.  Fiona is another ultra runner of awesome, and it was great to get to spend some time with her as we are normally passing in opposite directions on shorter races.  She finished her 50 and I had 1 lap to go, so that was it, back out and picking up the pace and the running intervals.  All I wanted to do now was finish, and finish I did in 11:42:08.  Louise was on hand to prove I was still running at the end and I am pleased to confirm that if I had needed to keep going then I could have.

Check out the medal! It’s huge and I was a bit worried I wasn’t going to be able to keep my balance when Traviss hung it round my neck at the finish. Totally worth the effort! 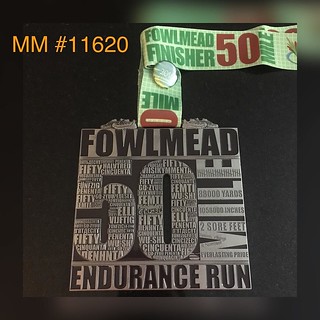 All in all a great experience, that I learned a lot from.  Now I just need to put it all into practice over the next couple of months so I am ready for July!

Garmin stats (click here if you can’t see the embed):