I signed up for the Kent Road Runner a year ago, just after friends had run the race and the Facebook hype was high.  At that point in time I had only run 1 marathon (and 2 ultras).  Fast forward 12 months and KRR was marathon 19 (count includes ultras)!  In that time I have run good races and bad, and whilst KRR wasn’t even close to being the worst race I have ever run (that has to go to Lydd 20) it didn’t live up to the hype for me.

Yes, it was well organised, yes it had a big medal, but if I hadn’t made so many friends over the last 12 months then I think it would have been a lonely 21 laps!  There were some ace supporters, and enough people that I knew on the race crew for me to feel as though they cared but it’s also a “road race” and that means run clubbers out for their 1 marathon of the year (or maybe 2 if they are on a 6 month training cycle)!

I’m not a fan of run clubbers, yes some of my friends belong to run clubs, I realise they aren’t all bad….but I hate the runners who barge you out of the way because they feel they have more right to that part of the track than you, or they deserve to grab that jelly baby, or are determined to snatch that water cup before your hand can close on it.  Unfortunately KRR had its share of runners like this, and that takes the enjoyment out of it a bit for me.

I was running the race with my friend Nikki, making her give run:walk ago to see if we could get her in within the cutoff, rather than her foregoing the race completely due to lack of training (if you can consider completing Brighton & London marathons earlier this year, by walking them both, a lack of training).  I was definitely taking her out of her comfort zone, but I like to think it was in a good way.  We chatted, ate a bit, ran a bit, walked a bit.  Rather than sticking to a fixed time strategy we decided to go with the undulations.  Run the downs (till our quads were hurting too much), run/walk the flats and power hike the hills…..it worked well and we ran past the personal drinks zone, walked from the portaloos, run down the hill, hike the hill, run round the mound to the poppies, walk to the next poppy, run down and round the bend before the long hike up the hill.  We made the half-way cutoff and ploughed onwards.  As time went on our pace slowed a bit, but we were still running and making a good pace on the run sections.  Nikki was starting to ache a bit, so we increased the walking to balance out the downs that were starting to get a bit painful for her. 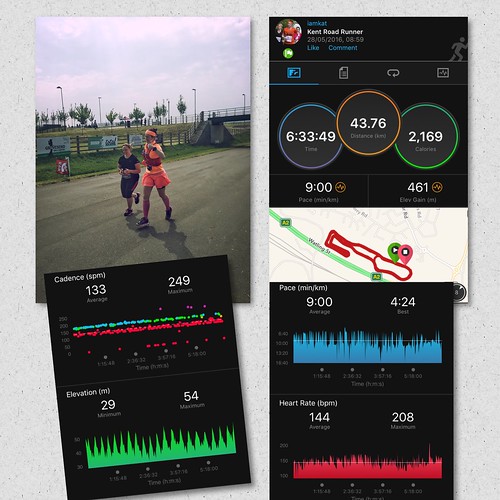 Unfortunately we hadn’t quite managed to stick to a fast enough average pace to finish ahead of the 6 hour cutoff, but Ian one of the race organisers graciously gave us the opportunity to see if we could complete the remaining laps by 30 mins after the planned cutoff.  We had already decided we wanted to give it a go….and off we went.  The pressure was piled on slightly but we decided to just keep going until we had finished or been pulled from the course.  After all, Nikki had very nearly not started, so even if we didn’t get the official finish we had had a good training run.  Thankfully we made it round to finish in 6:33:50 and get our medals.

Would I do the race again? Yes, if I was after a fast, road race, with a lapped route I could power round without worrying about uneven terrain or massive hills.

What would make it better for me?  More clarity on the cutoffs.  It became clear after the race that pressure was being piled on by the owners of the site the course was on.  Being clear upfront that all runners need to be offsite by time X or they’d be locked in all night would make sure there was no ambiguity and no one would look at finish times from previous years and think they would be OK.  Set the mid-race cutoff at 3 hours, people generally get slower in the second half of a marathon and it gives them more leeway to make the final cutoff without having to run a huge negative split.  Finally, have a sweeper, set them loose after the mid-race cutoff and give the slower runners more warning that they might be pulled.  By making it clear that if you drop behind the pacer and haven’t caught up by the end of the lap then you are out would mean you don’t find yourself right up against the wire with the finish in sight but the hope of a medal has gone.

All in all it was a nice day out with friends (too many to mention as someone will only get offended), and marathon 19 in the bag (by the skin of my teeth)!

Click me for Garmin stats if you can’t see the details below: