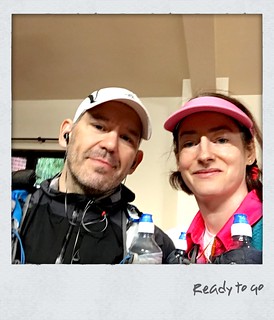 I went for another run at the weekend (Robin Hood 100). It was supposed to be a pleasant, 100 mile bimble along the Chesterfield Canal, round Sherwood Forest twice and then back along the canal. What actually happened was the first canal bit and the first loop!

The day started off brilliantly when we couldn’t get out of the hotel car park because the code to lift the barrier wouldn’t work. Not for us, or the night porter. In the end he had to switch the barrier on and off again to trigger the “IN” barrier to lift as we drove through at high speed, hoping we would make it before the barrier dropped on us. Luckily we, and the car, survived.

Of course this still wasn’t a huge issue as due to my love of being early for stuff I think we were still in the first 5 runners to arrive at registration. Numbers allocated, RaceDrone trackers collected we set about faffing for the next hour. Getting Tailwind into bottles, drop bags loaded to the van to be taken to Aid Station 3, numerous trips to the loo, deciding if I wanted my jacket out (light drizzle) or not (drizzle had stopped). In the end I went for arm sleeves instead and it was the right move. 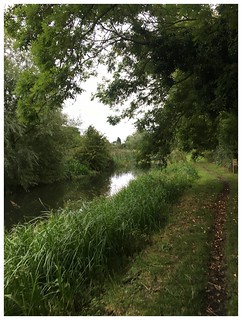 The Boyf and I set off at 8am, taking it steady and positioning ourselves near the back of the pack. We weren’t in a hurry and the plan was to run 4 mins:walk 1 minute from the start. We stuck to this and made good time along the canal, reaching the first aid station (10.4 miles away) in just over 2 hours. A refill of our Tailwind….conveniently packaged in individual plastic bags, snip the corner, add powder to bottle, top up and away we went. The scenery was lovely and the course was empty! We barely saw anyone in the first 20 miles other than a couple of dog walkers, a runner and the aid station crews. We did see sheep, horses, pigs, cows and a king fisher!

Aid station 2 was just off the canal at 16.2 miles and we hit this at 11:32. Another bottle top up with Tailwind and here we went with the refined technique of adding the water to the plastic bag, a quick shake to dissolve and then snip the corner to pour the water into the bottle before topping up. Much quicker and a lot less sticky (plus the powder doesn’t blow everywhere). I was also adding Peppermint Oil or Sicilian Lemon Juice into a couple of the bottles to add extra zing! Plus the peppermint is great for cooling and keeping your stomach settled.

Aid Station 3 was just under 3 miles away (19.06) and we were there by 12:19. Although I had up to 20 mins on my plan to stop here we probably weren’t more than 5 minutes. Another Tailwind top up and a swap out of our first fresh bag of Tailwind and gels to cover us for the next 30 miles. Can you sense a theme here? It’s all about the Tailwind!! 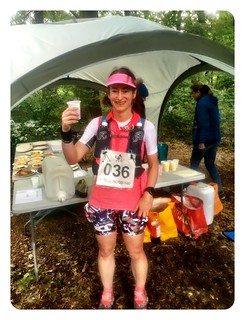 We continued to make good progress to Aid Station 4, we were into the forest trails now with greater tree coverage and an increase in humidity but the run:walk strategy was working well and we were making good time. Still slightly ahead of my “ideal” zone on my planner. Hurrah!

Aid Station 4 to 5 was where I started to feel the heat. Not the external heat so much as my internal heat. I could start to feel my temperature increase but at this point I wasn’t really acknowledging it. I think the Boyf may have noticed a slight slowing in my pace but I think at that point he put it down to me running the undulations. As he put it afterwards, I was running stuff he would normally have walked on a 24 hour race like Spitfire Scramble. At this point though I was happy, not feeling like I was trying to hard and felt as though I was running well within my limits. 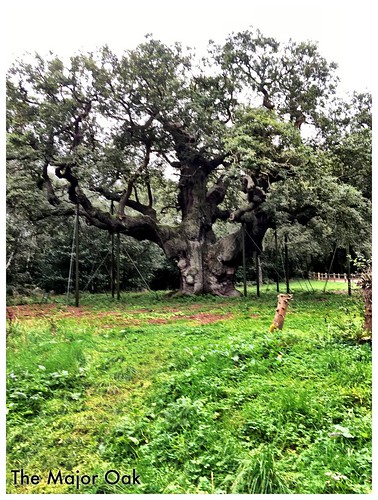 Aid Station 5, 27.78 miles was reached in 6 hours 37 minutes and after topping up my bottles I poured a glass of water over the back of my neck. This helped me fell refreshed and we headed off into the 10 mile loop that would take us past the Major Oak. I was really enjoying myself and the scenery, but as we dropped down into the forest the humidity started to take its toll. Once we were past the Major Oak we were finding more ups than downs and we adjusted the run walk a bit more to have slightly longer walk breaks to keep me feeling in good shape. By the end of the 10 miles things were starting to be more of a struggle though.

We arrived back at Aid Station 5 having taken 2 hours 40 minutes. So about 30 minutes longer than our 10ish miles along the canal had taken, but considering our legs were less fresh and the course was more undulating that isn’t a bad drop off. This aid turnaround took slightly longer, I had removed my t-shirt in a bid to cool off, got my water bottles refilled with more Tailwind and took time to get myself bug-proofed with Avon Skin So Soft…..this worked as I only have 1 mosquito bite on my ankle and whilst it’s a bit red it hasn’t blistered like the last 2 mega-bites I have had.

The Boyf and I headed off to Aid Station 6, this section was less fun, there was a lot more running on actual road, and the local drivers weren’t really fussed about giving us much room. Plus my internal temperature was really starting to spike. Despite not having any nausea at all (thanks Tailwind), I did start to get a couple of vomit-burps bubbling up. Not a good sign….this meant I was starting to properly over-heat and my body wasn’t happy about this. We were about 40 miles in when it really all did go wrong. Despite having my cooling rag round my neck I just couldn’t keep the pace. We slowed to a walk in a bid to try and keep me cool but by the time we got to Aid Station 6 I was pretty sure that it was game over. 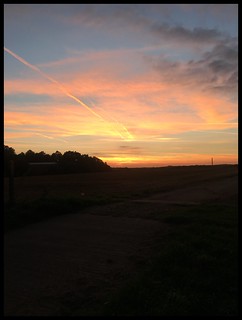 A lot of chat and analysis was going on as we kept pushing forward, but it was obvious I wasn’t able to run any more. My legs were feeling strong and I could keep my pace up, but if I did my temperature spiked and that wasn’t good. What was a worry was that we were pretty much alone on the trail, in the middle of nowhere with no mobile signal. We had trackers with an SOS button but didn’t really want to get in a state where we needed to use those. We carried on from Aid Station 6 to Aid Station 3 (back at the start of the 30 mile loop) as dusk, then darkness fell and decided that we would call it a day. There was no way it would have been sensible to set out for the 30 mile loop again. Yes I could have walked the remainder of the race, but I didn’t set out to walk 100 miles, I set out to run 100 miles! This wasn’t about gutting it out and ultra-shuffling to the end. If I was going to do it I wanted to do it safely AND in (some semblance) of style.

So we decided enough was enough….a gutting decision to make, especially as we were meeting our lovely crew member Fiona back at Aid Station 3 as she was going to look after us throughout the night. Best laid plans and all that! So at 20:41, 12 hours 41 minutes after starting we reached the 48.66 mile point (80.11km in Garmin distance) and handed in our trackers.

Huge thanks go to the volunteers who fed the Boyf soup (I couldn’t risk it for fear of triggering more over heating) and helped us get in touch with Fiona when we couldn’t get a mobile signal. She eventually managed to find the aid station location (not easy in the pitch-black with a post code that didn’t match the real-world presence of the station) and rescued us. A trip back to the village hall start point, a chance to change into fresh clothes, and then we headed to McDonald’s for a chat and burger. I can’t thank Fi enough for trekking halfway up the country, sitting and chatting to us before driving home again with minimal crewing complete.

We were back home before 3am, bathed in Radox Bubble bath with added Epsom Salts and Rosemary Oil (the perfect recovery combo, and the rosemary oil is great for soothing irritated skin e.g. mossie bites and bramble grazes!) and that was me out cold! Not the race I had planned but one that has given me much food for thought and a reignited plan for the future. More on that to follow! 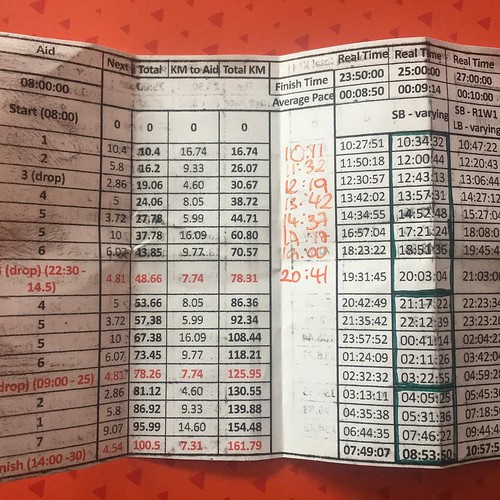 Garmin Stats (click if you can’t see the embedded version):