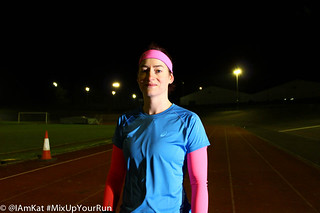 Yesterday’s run in my TrainAsONE schedule was for a pickup session, so as this required a a range of pacing (and because the Boyf fancied some intervals) we decided to head to the local track to be able to run without the pressure of dodging the post-work crowds around town. Â We then had a pre-run flurry of chaos when he decided that rather than just getting some iPhone shots for me he’d dig out the camera and do it properly. Â I’m glad he did, as I think (and hope you’ll agree) that he got some great shots of me.

The 33-DFA trainers I have been sent fall into the “Run Natural” category of ASICS trainers, they are light, low profile and very low to the ground. Â With a 4mm drop, and low midsole the idea is that they encourage you to run in your most natural position. 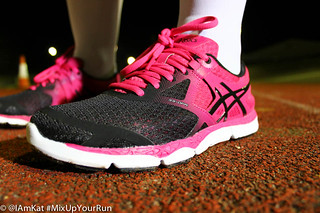 You can read the full details about these trainers on their website (33-DFAÂ Women, 33-DFA Men). Â Thankfully these are the same heel drop as my Skechers, so I was able to dive in with a relatively lengthy session in them. Â If you don’t currently run in minimal trainers then be warned, it can be a shock to your calves, so make sure you build up your time in them slowly!

The Boyf got the photos out of the way first, it was great fun shooting with him again and even more fun running over the top of him whilst he lay on the track to get the angles. Â I ran short sections whilst he made sure we had a good range of photos and then we got cracking with the session. Â I was dressed in the clothing that ASICS had sent through, with additional SKINS underneath because it was hovering around freezing and I had no intention of running as an ice-block. Â I still had numb hands though, despite my eGloves. but after about 4km they were back to being toasty as well.

The 33-DFAs were really comfortable and fitted well on both feet (once I had worked out that the reason the right foot felt a bit cramped was because I had failed to take out the insole before putting my custom footbed in!). Â There were no hotspots or pressure points and I soon settled into the session. 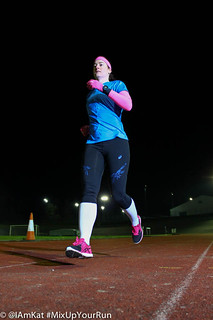 I really enjoyed the run and the kit all felt really comfortable, no rubbing anywhere and I felt warm without being over-heated. Â Over-heating is a big issue for me so I may test out the clothing in the gym this week to get a feel for how it performs when it isn’t freezing. Â I could feel a little bit of calf tightness as I ran but that could well have been the cold, they aren’t feeling tight today so even if it was the slightly lower sole profile of the 33-DFAs then it certainly has’t had a negative effect on my legs. 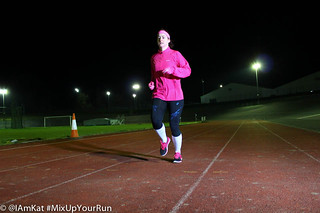 It will be interesting to see how they feel on tarmac rather than track, and will give them a session along the Rhein this week to see how they handle a slightly rougher and harder terrain.

One final thought on the colour, yes these are pink, I know a lot of girls, female, runners, women (however you think they should be referred to), dislike pink. Â I like it especially when it is bright, “hot pink”. Â I am a lover of bright colours and especially of stuff that not only makes me stand out from the crowd but also visible at night. Â So from my perspective the trainers and the jacket are an absolute winner. Â For those of you who are not so keen then you’ll be pleased to know they have other colours as well (very bright, slightly less bright). Â