I have been immensely lucky (thanks to The Running Bug) to be one of a group of runners chosen to be involved in the ASICS Europe #MixUpYourRun campaign. In part this campaign is to promote their new Gel-Glorify trainers, available exclusively through Intersport but also to encourage you to mix things up a bit having more than one pair of trainers and swapping them around based on the type of running you are doing. Â You may think this is just a ploy by ASICS to sell more trainers but as someone who already has trainers for long runs, trail runs and shorter faster runs then I don’t need convincing that this is a good idea. Â The exciting thing is that I have been sent 2 pairs of trainers, the Gel-Glorify (exclusive to Intersport) and a pair of 33-DFAs along with some clothing as well. Â Over the next few weeks I will be testing it all out and sharing my views so that you can decide whether you too can benefit from mixing up your runs.

At present I am also one of the beta testers for TrainAsONE, and this means I already have a good mix of runs in my weekly schedule. Â With a range of slow runs, intervals, pickups and long runs I am working towards what I hope will be my first Ultra distance on 22nd February. Â Hopefully the Gel-Glorify will be perfect for the attempt. 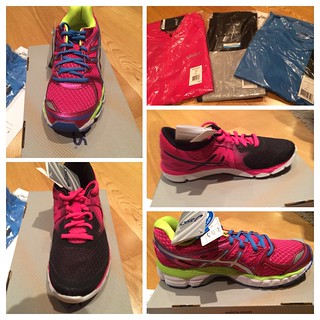 The frustrating thing this week was that the parcel of awesome was delivered on Tuesday, and I was away with work so I didn’t manage to get my hands on it until I flew home late on Thursday (too late for a run unfortunately). Â Included with the trainers were some running capris, socks, a t-shirt and a light-weight jacket. Â It all fits perfectly andÂ in addition to blogging about the trainers I’ll also share my views on the clothing as well.

I’ve realised this post is forming up to be a monster, so on second thoughts I’m splitting it into two and will cover last night’s 33-DFA run in a fresh post.