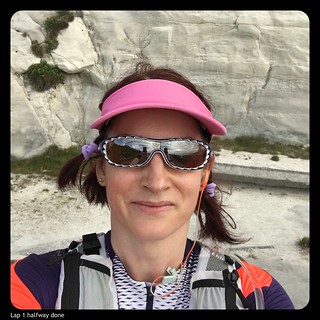 It’s taken me a few weeks to get round to writing this post as I’ve needed the time to get over my first 100 mile race, held at Samphire Hoe. The race that didn’t end at 100 miles as I had hoped, the race where I rang the bell and called it quits at 74.2 miles.

It took at least a week for me to not bawl my eyes out whenever I told anyone I hadn’t finished the race. Even though it was a choice, it still broke me to stop and it was hard to admit to people that I had failed. Of course no one else seemed to think I had failed, I did of course run 74.2 miles but it wasn’t what I had planned and I was, and still am, gutted.

I don’t regret stopping, it was the right decision, but I do regret some of the choices I made during the race, which contributed to my downfall.

Everything started so well, the Boyf and I had our plans for the race, our mini aid station was set up with everything I thought we might need and I even thought I was prepped for the weather. It was clear that Summer was coming to Samphire Hoe and I wanted to be ready for it. Factor 50 sun cream, special cooling rags for my neck and a hydration bladder in my pack. The plan was wrong from the start, I realise now that I need to focus on the race in hand, not future races….perhaps at least where 100 milers are concerned.

I stupidly planned to not take advantage of the looped course with food & drink every 3.7 miles. Not wanting to lose too much time stopping, and thinking it would be good practice for point to point races with distance between aid stations, I was carrying a larger pack with extra water, and plenty of food. This worked well for the first few laps, I was eating and drinking regularly and wasn’t suffering too much in the heat. I was hot, but I was dealing with it. A standard loo stop at about 10 miles and I came in to finish my first marathon in 6 hours. 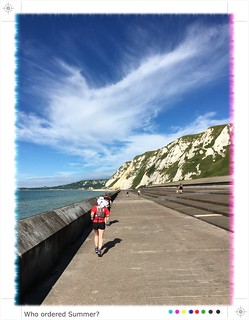 Wanting to make sure I didn’t overdo things I took 20 minutes at this point to refill my bottles, hydration bladder and food stores. I was happy, confident and raring to go. Marathon 2 was then underway, and this is where it started to go wrong. Nausea hit around the 30-35 miles point. I was expecting it, and kept pushing onwards, I tried to eat and drink as much as I could but I just couldn’t shake the sick feeling. Sweet food, savoury food, swiftly melting salted caramel ice cream were all eaten and none of it helped so in the end I took control and made myself sick. That helped! Aside from needing constant loo stops things were getting better. That should have been a clue, but I was too dense to see it for a while, nausea and a constant need to pee, despite not drinking huge amounts, “salts” way out of kilter! When the penny dropped I started to up my S!Cap intake, and it actually seemed to work for a while. 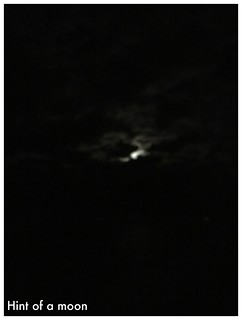 Darkness came but it didn’t get any cooler, I ditched my pack and rolled up my top trying to get cooler but it was a struggle. I did make progress for a while, I was still on a strong(ish) run:walk strategy, I enjoy running in the dark and I still felt in control. Then the stomach issues started….no more sickness, but the feared “runner’s trots”. My pre-race Imodium were no longer useful and I was managing to get a lap done before I needed another stop. Every time I picked up the pace I felt my stomach gurgle and prepare to explode, so I’d slow to a walk. It was so bad on one lap that I even needed to cut back to the loo halfway through the lap before heading back on course again.

I got things briefly back on track for a while with the help of Dee, Sarah & Maryanne the queens of cuppa soup, buttered toast and “get your ass out of here” encouragement. I managed to get some more running done, but in the end I was finding that the only way to keep moving forward was to walk not run. Having given myself a massive blister from walking in my running trainers at Endure24 I decided it was time for a change of shoes and socks. I had my trusty Skechers Go Walks with me, and decided that if I was going to hike it for a while that these would be the better option. I almost regretted taking my socks off, despite not having been painful my feet looked as though I had spent all day in the bath…..not good! I decided not to look too closely, drenched my feet in GurneyGoo, got a fresh pair of socks on and put on my walking shoes. Then I was off. I still wanted this, and I really thought I could do it. 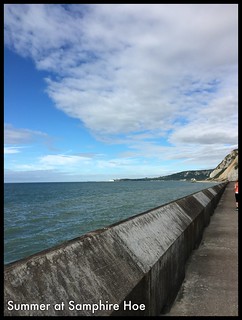 I made it to day break, I was feeling strong and happy and my stomach seemed much better. Fiona had given me some magic, chewy mints that really helped and knowing I had made it through the night really helped. Lorraine made me more toast and we headed out for a lap together. I think it was a good lap, I was feeling positive and I still thought I could get the job done, the maths was there. I have never felt like I have gone downhill so fast…..the Boyf joined us as he was flagging and wanted some company, all was good, we hiked along making good progress, then I needed a wee stop (thank goodness for beach access at the bottom of the hill). As we continued our lap I started to struggle more and more, my pace was slowing, I was struggling to swallow and breathe and I could feel panic building. Not about finishing the race, just general unfounded panic. We needed to stop a couple of times for me to catch my breath/not throw-up and then I knew I needed another wee. At Samphire there’s nowhere to hide! I managed to hold it till we made it back to the beach, it was worth the stop, it was definitely a full bladder moment, one I suffered again as we came to the car park.

The Boyf and I knew it was over, whilst my legs were strong my body didn’t want to play ball and I knew that with the best will in the world my hydration and fuelling was too broken to go on. I knew I couldn’t survive another 7 laps in the heat that was to come, especially if I had to stop for a loo break every kilometre! The pace:distance maths didn’t work and I didn’t want to not finish at all (go beyond 8am and fail to make the distance and I would get nothing), quit now and I got the challenge medal, goody bag and hopefully a body that would recover. I knew that my body was shutting down, from experience I knew I couldn’t get back from where I was in the time I had.

I told the Boyf and Lorraine that I was out, sent him on his way and then walked up and rang the bell.
It wasn’t hard to do, I knew it was the right decision, but it ripped my innards out (what was left of them), and the tears flowed. I certainly stunned a lot of people! Rachel couldn’t believe what I had done, but I think a lot of it was down to the fact I had mostly kept my suffering to myself. I hadn’t been hanging around the aid station that much and I had mostly been moving when within site of the support crews, so it was a bit of a bolt from the blue.

I crashed in the car, I was gutted not to be able to support the Boyf but I was totally drained now that I had finished and just needed sleep. It helped, I kept dozing and waking up to check on the Boyf as he did his loops and then I perked up enough to be ready for his finish.

I am so glad one of us made it! 100 miles is a long way, and we worked hard to be ready, he was just more ready than me! 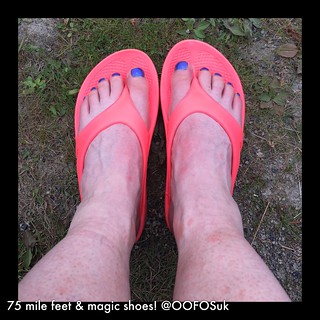 Things I have learned: 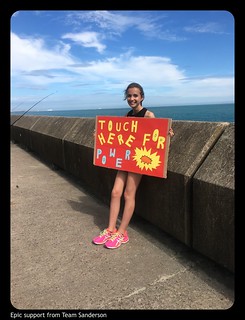 Massive thanks to everyone who ran with me, gave me encouragement, kicked me up the butt, fed me soup and toast, chewy mints, tubs of sweets and all the hugs when my heart broke!

Crustie, Dee, Fiona, Gemma, Jackie, Jake, Janet, Jon, Liz, Lorraine, Maryanne, Sarah, everyone on the course or there supporting all the runners and of course the two that started this all in the first place, Traviss & Rachel…..I couldn’t have made it to 74.2 miles without you…..thank you from the bottom of my broken heart!