I did it! I am now officially an ultra-marathoner! As you can imagine it has been a busy weekend, so I will admit straight away that the 40 Days of Fitness Challenge was put on hold.Â  Whilst Saturday’s challenge looked fairly easy I didn’t think it was advisable to try new exercises the day before the Hugin Challenge.

We kicked off the weekend with a return visit to Ashford parkrun, where I volunteered as Tail-runner to ensure I took things nice and easy.Â  It was great fun and whilst running & chatting my way round with one of the Ashford run directors (who was being slowed by her dog refusing to run & was reduced to carrying him), it turned out that she was doing the Hugin too.Â  The weather was shocking, drizzle, cold and then some snow, but it was great to be there and clock up another parkrun even on a rest-day.

Sunday was the day, we rocked up to race registration with plenty of food along with some donations for the aid station as well.Â  Given that it was the first time the Boyf and I had attempted an ultra-marathon we weren’t entirely sure what food we would want to eat throughout the 6 hours of running (especially as I had read so much about tastes changing over time).Â  We had packed everything from gels to crisps and peanut butter pretzels, so with our food bags and the amazing spread that Traviss and Rachel (the race organisers) had laid out we knew we would be OK.

I had 3 goals in mind for the race, stretch goal 10 laps, ideally 9 laps to get the ultra and I would settle for the 8 lap marathon.Â  After a quick race briefing we were off, I was determined to start slowly and settle into a good pace over the first lap.Â  I wanted to get a feel for the course and identify areas where I could push a bit and others where I could take it easy and eat/drink without choking or drowning! 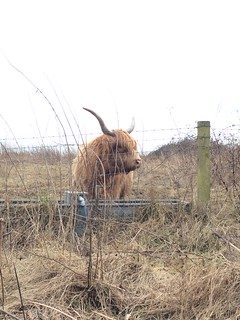 The lap had a couple of kissing gates, which meant on lap one there were a couple of pinch points as we were quite bunched up.Â  This all changed from lap 2 onwards though and for lap 1 it meant that I stayed at a comfortable pace and didn’t get too carried away.Â  We wound our way through the Pegwell Bay Nature Reserve and I was so happy to spot some horned beasties in the distance.Â  I love seeing cows on my runs, and I took this to be a good omen that it was going to be a good day.Â  Once out of the nature reserve it was onto the main path along Sandwich Road, and we soon reached the hill.Â  I nick-named this “Cake Hill” as I knew I’d be using it as a convenient location to walk and fuel. 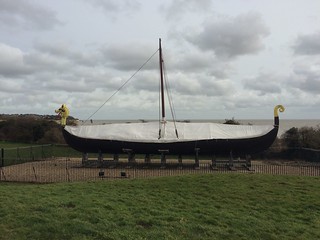 At the top of the hill we soon saw the Hugin for the first time, it had its Winter covers on so you couldn’t see its full glory but it was still quite a cool site to see.Â  Another slight hill, then round the corner, up a muddy slope, across the grass back to the Hugin and then it was downhill to flat and back to the aid station.Â  Each lap was 3.28Â  miles, and as I completed lap 1 I grabbed the hairband I needed to show lap completion and pushed onwards.Â  I was aiming for a pace of around 6:55/km as I knew this would let me hit my goals and would prevent me tiring too soon.Â  I had settled into it well and all felt good, by lap 3 I started to walk on “Cake Hill”, keeping a fast pace but ensuring my mini-Soreen bar didn’t finish me off.Â  I was sipping my water & Nuun, alternating bottles to try and balance my fluid loss/intake and feeling really strong.Â  I soon hit the end of lap 4, the half marathon point and was inside 3 hours.Â  The ultra was definitely on, I knew now that I could do this. 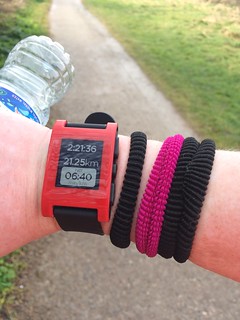 I have been beta testing the TrainAsONE training program and the key to their training is “Train Smarter, Not Harder”.Â  I had been training for the Hugin Challenge since the start of November and in that time my longest run was for 75 mins (I ran about 12km).Â  You can imagine I was slightly nervous about running for 6 hours, had I trained enough? It’s hard not to compare yourself to other runners and when you see friends who are still 8 weeks out from their Spring marathons running 18 miles on a Sunday the odd doubt sneaks in.Â  At the half marathon point I knew I had nothing to worry about.Â  I was well trained, I was fit and I knew I could do this!

I took advantage of this confidence in myself to take a pit stop at the end of lap 5.Â  My Garmin 620 showed I was 4 minutes ahead of schedule and I decided it was better to use this to have a quick “sit down” and continue in confidence that my stomach would behave than to be caught short at an inconvenient point on the course.

I was using the aid station to fuel on a mix of sweet and savoury goodies, tortilla chips were amazing, as was half a mini Bounty.Â  I never realised that squash could be so tasty eitherâ€¦.it was the perfect strength, plenty of flavour and it was really refreshing.Â  The only food mistake I made was my stash of salted liquorice! It’s great sitting at home but eating it whilst running really made me want to vomit (definitely crossed off the list for next time, the peanut butter pretzels can stay though).

One of the best things about the course was the out and back section up to the Hugin, this meant you kept passing runners going the other direction so there was plenty of encouragement.Â  It was also nice to see the Boyf more than I normally would, it meant we could keep a check on how each other were getting on and it was reassuring for us both to know the other was going OK.Â  The support from the runners and the team manning the aid station was brilliant.Â  No matter what distance people were running (everything from a single-lap to ultra distance), they were friendly, encouraging and supportive.Â  It really made a difference and although I was running on my own there was always someone in the distance so I never felt alone.

I’m pleased to report there was no Staveley-esque mental melt-down, but it did all start to ache a bit around lap 6, but let’s be honest, that’s about 20 miles and I am pretty sure the odd ache at that point is to be expected.Â  I kept pushing onwards, the odd extra walk break was creeping in but the run intervals were still at a sub-7min/km pace so I was really happy.Â  I decided that although I was doing well time-wise that I didn’t want to do 10 loops.Â  I could have done it but I might not have enjoyed it as much, the key for me was getting the ultra.Â  I took it steady and pushed onwards, it was great seeing the Boyfand grabbing a couple of hugs.Â  He’d already hit the marathon point by then and was on lap 9.Â  I came to the end of lap 8, marathon completed and collected my lap band.Â Â  Quick look around and he wasn’t at the aid station so I knew he was still out there, so I decided that as I had plenty of time to get out of the aid station before the 5:45 cut-off I’d squeeze in another loo stop before topping up my food & water for lap 9â€¦.my ultra lap!Â  I am so glad I did because I came out to find that he was there and about to set off for his 11th lap!Â  We decided that time was no longer a focus and set off together to walk what would be our final lap.Â  It was a really nice way to round off the day, chatting about our experiences, our aches and pains and how much we had enjoyed it.Â  We came through to finish atÂ  6:13:55, both ultra-marathoners!Â  Rachel noted down our times and pushed the best rocky road ever on to us and Traviss pinned the “ultra” badges to our medals and hung them round our necks. I am not kidding when I say it was hard to stand upright whilst wearing it, it is massive and heavy but a worthy medal for the achievement! Â I ran 29.7 miles, the Boyf did 36.3 miles! 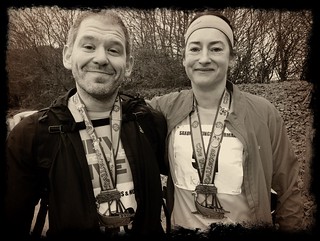 We jumped in the car, determined to get home before my legs seized and I struggled to drive, so it wasn’t until I got back and synced my Garmin that I realised quite how well I had done. New PBs for half marathon and marathon times and of course a new furthest distance! I was so stoked (as you might have noticed if you follow me on Twitter or Facebook). 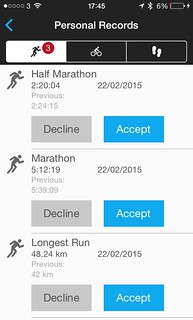 It’s worth mentioning that I did run in the ASICS Gel-glorify that I have been testing.Â  I had run Ashford in them without niggle so figured I would start the Hugin in them and switch to my Skechers if they didn’t feel right.Â  They felt so comfy throughout the day. 6 hours is quite a long time to be on your feet, especially when half the course is hard path, and at no time did I feel like my feet were in pain or my joints were jarred by impact.Â  I finished blister free as well.Â  So if you are looking for a nice comfy trainer for your long runs then do check out the Gel-glorify at your local Intersport store and see if they are the right fit for you.

Did I enjoy my first ultra? Most definitely! The team at Saxons, Vikings and Normans Marathons really want to ensure you have a great race, and it was so much fun, with so much support, that when Traviss announced on Sunday that they had got permission to run the race again in November, I signed us both up!

If you want to join us be quick, entries are expected to be full later today!

Just check out the combined contents of our goody bags! 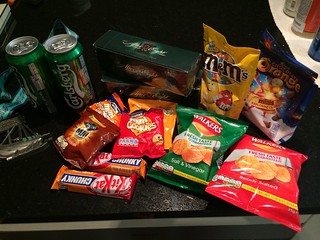 Garmin Stats (I forgot to have auto-pause on):