I am very lucky that I have found a training plan that really works for me and am grateful that @DrRadford chose me as one of the beta testers for his TrainAsONE program. The train smarter, not harder focus of the plan suits me down to the ground….it’s not that I am lazy but I like the focus it gives me and I like the way that each run has a purpose. I even enjoy the threshold and sprinterval sessions as I know that they are constantly improving my fitness.

It seems that a lot of people lose speed over shorter distances when they are training for a marathon, but because of the faster sessions on my plan I have done the complete opposite. My recent 5km parkrun PB was a welcome surprise and the bank holiday saw me fulfill my need for speed once again!

After a bit of parkrun volunteering at Wimpole Estate on Saturday 23rd May, the Boyf and I headed in to London as I had managed to get us a sneaky deal on a room at Le Meridien in Piccadilly, perfectly placed for the BUPA Westminster Mile & London 10,000 that we would be running. I’d even secured a late check-out for Monday so we could grab a shower before catching the train home. A relaxed afternoon and an early night meant we were raring to go for the Mile on Sunday. It was great to catch up with our parkrun friends, some running in the parkrun wave with us, others running as part of the SRC waves as they are regular SRC runners as well. We were both undecided about whether to go flat out or run at 10km pace as we didn’t want to be too tired for the following day’s 10km but we split up in the starting pen with him moving to the front and me hovering near the back with Karen. I finally decided to run at about 9 minute mile pace and after wishing Helen Williams good luck for Comrades (she finished it!) we were off. I set off at a comfortable pace, it was slightly faster than planned but I felt good (obviously my new Batman top has super-powers). Coming up to 800m I realised I was heading for a sub9, but just kept the steady pace. I remembered from the 10km last year that the final 800m goes on forever and it did, 400m eventually came and then at 200m to go I kicked into a mega sprint and case in for an official mile PB of 8:07. A huge thanks has to go to Kezza for the extra loud shout she gave me with about 20m to go!

A sensible afternoon of refuelling (a giant chicken salad and beer from Byron’s) and an early night meant we didn’t suffer from our excessive speed (The Boyf also PB’d with 5:43). Monday was BUPA London 10,000 day and as we were staying close by we were able to head straight to the start without dropping any bags. This year The BoyfÂ was in red A and I was in black A. This was the 2nd of the colour waves and a significant improvement as I started at the back last year. This year’s course went along the Strand and Chancery Lane rather than the Embankment and I am pretty sure it was hillier. I wanted to get round sub58 to beat the time of my 10km at the Jigsaw run in November but would have settled for beating last year’s time of 59:39. I set off at a comfortable pace and was feeling good when I eased past Rosemary at around the 4km mark, a quick hello and I pushed onwards. Reaching the turnaround point I was starting to feel a bit stressed and a check of my heart rate showed it was 195bpm, a bit on the high side even for me! I checked my Garmin pacer and it showed I was over a minute ahead of schedule so I took the opportunity to walk a few paces and take on a gel and water as we came to the 6km point. I knew now I could finish with a PB, I just had to keep calm and steady and not pick up the pace too early. I kept pushing onwards, back up the Strand and then past Horse Guard’s Parade (or so the course map tells me, by then I was only looking forward, focused on finishing). Finally we turned on to Birdcage Walk, back on familiar turf after the Mile but this time I was empty, at 200m I tried to sprint but couldn’t and it wasn’t until I rounded the corner with 100m to go that I really managed to pick up the pace. In the end it didn’t matter, my official chip time was 56:23! The Boyf managed a race PB of 40:23 despite taking it easy ahead of Wednesday’s race. 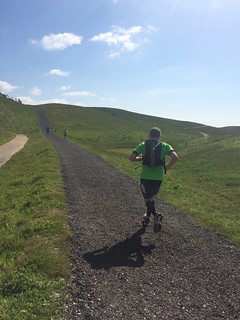 After a lazy day on Tuesday we were ready for our biggest challenge yet and on Wednesday morning we were at Samphire Hoe, bright and early ready for the Dunkirk 75 challenge. This was another brilliant race put on by the Saxons, Vikings and Normans team of Traviss Willcox & Rachel Smith. Scheduled to celebrate it being 75 years since the Dunkirk rescues the race briefing finished with us all singing the National Anthem and a minute of applause. Then we were off! The course was an out and back 3.85 mile route that wiggled through the Samphire Hoe nature reserve (a few hills to keep you focused and give you a break as needed) and then the sea wall section which seemed to last forever! My plan was to complete 8 laps and the Boyf was aiming for 10. I had planned my pacing to get me to the “marathon” point by the 5:45 cutoff and then do the last lap with the Boyf in the same way as we had done at the Hugin Challenge in February. Everything went really well, I settled into a good pace and surprisingly managed to keep my heart rate under 180bpm for the most part. I was ahead of schedule at the half way point and stayed that way until the end of lap 7, coming into the aid station with 14 minutes to spare before the final lap cutoff. From about lap 5 onwards I was doing more of a run:walk pattern that just running but was really pleased that in the run portions I was still managing to hit 6:25-6:40/km pace and I think I could have kept that up for a few more laps if time had allowed. 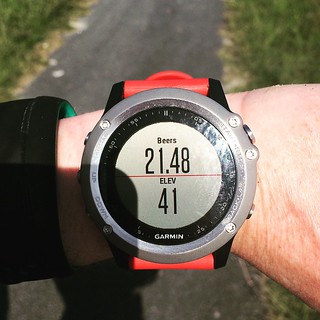 From lap 5 it was starting to get a bit dull as well so I switched my music to an audiobook (The Chimp Paradox #RunFurther) and started using the circular mini-columns along the sea wall to do Fartlek style runs, picking a number to run for and then switching to a walk. The counting distracted me a bit and varying the times/distances of the run:walk sections helped keep me moving forwards. The Boyf hadn’t factored in that we had started about 10 minutes late, so thinking he was about to miss the cutoff he sprinted in to complete his 9th lap with 7 minutes to spare! A quick dousing with water to cool off and a snack from the aid station and we headed out for the final time. The sprint had really taken it out of him and so we were walking rather than running but he started to perk up with half a banana and an S-Cap and we were able to walk a bit faster on the return journey. In the end we finished in 6:54:44 (we stopped for a 5 minute chat with Traviss on the way back in) with me having run 49.6km (30.8 miles) and him having done 62km (38.5 miles). Our furthest distances yet!

It was well worth it, both the bling and the goody bags were exceptional and I must say a huge thank you to everyone that was there on the day, Traviss and Rachel, the volunteers and all the runners who supported me and kept me pushing on-wards. I couldn’t have done it without you! 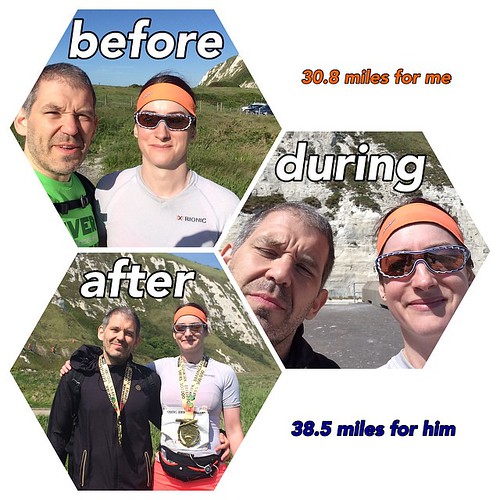