Things have been going really well with my running training recently, even though I haven’t been getting to the gym as much as I would like I have still been managing to hit my 4 planned run sessions a week. Not only have I felt like the training is going well but my results are proving it. As you may remember I have been following the TrainAsONE program as a beta tester. Their ethos is very much about training smarter, not harder. This doesn’t mean the training is easy but it does mean it is very focused and also that I don’t run excessive mileage (definitely a good thing when you have quite a busy work:life balance to manage).

About a month ago The Boyf and I ran the Folkestone 10 Miler for the second time. I was unsure how to approach the race going in to it as last year I had put in a good time whilst testing out a run 800m: walk 200m strategy which meant the running intervals were pretty speedy throughout. In the end I decided to just try and maintain a steady pace of about 6:30mins/km throughout the race and minimise any walking. It was great to bump into Rosemary Egbe just before the race. It was one of those really bizzare situations where the Boyf and I were walking along and he asked in she was racing as he thought she had done it the previous year. Cue her appearing in the start field about 30 seconds later to a complete double take from me. Whether his peripheral vision caught her and kicked off his through processes or it was just a random occurance I am not sure but it was great to see a friendly face. I also spotted Jo (@jofwise) and her Maidstone SRC crew at the start, they were doing a marathon pace run pre-Brighton so started slightly quicker than me but I eased past them at the first water station. I was loaded with water and fuel and wanted to maintain a steady pace so kept pushing onwards.

I felt really good as I approached the turnaround point and after stuffing in some Sports Beans I took a brief walk break up the mini-hill at the start of the return leg. My heartrate had jumped to over 190bpm so I took it as an opportunity to calm myself before heading back to the finish. I was trialling a new fuelling strategy, water in one bottle and a Push gel squirted into water in the other. I was starting to get a bit warmer so I was trying to keep cool by pouring water over myself at the water stations, also running through the puddles to keep my feet cool as well.

The Boyf, having finished ahead, of me had come out to meet me about a mile from home, apparently I still looked fairly strong at this point but I held back for my sprint finish until it was actually in sight (I hate it when marshalls tell you it’s only 200m to go when you know it’s half a mile!). I was really pleased to finish the race in 1:40:46, 1 minute 45 seconds quicker than the previous year!

Fast forward a month and I decided to test my 10km pace for the upcoming BUPA London 10,000 at the nearly new Luton Wardown parkrun (event #3). A 3 lap, mostly tarmac course, with a bit of a hill that you need to scale 4 times, it seemed like a good opportunity to see if I could sustain a 5:45/km pace. It was a really nice course, despite the grassy hill and I was pleased to run a bit faster than planned and get a new overall parkrun PB of 27:44…..1:06 quicker than the one I set in Chelmsford 13 months ago. 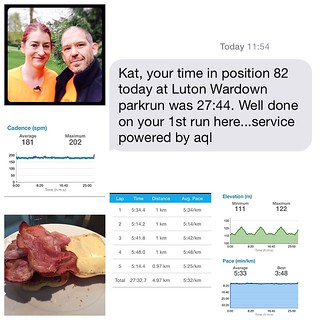 So there it is, training smarter seems to suit me, and despite the fact that my training plans are based around me running marathons at present it is great to see my speed in shorter races isn’t suffering!