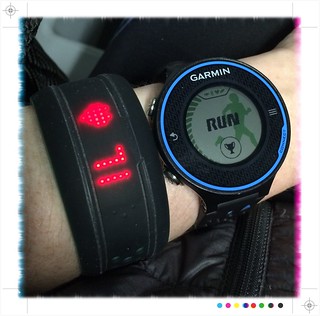 Last year I was lucky enough to get my hands on a TomTom Runner Cardio watch to play with and whilst it didn’t quite measure up to the functionality of my Garmin 620 it was pretty impressive (especially when you compare the two on cost). What I did like about it was the wrist-based heart rate monitor. I have suffered with under-boob & back chafage a couple of times with my heart rate monitor chest strap and so really liked the fact I could get my heart rate from my wrist, especially when it matched the chest measurement closely.

Fast-foward to Janaury and I saw an advert for the Mio Fuse on the back of Women’s Running and I swiftly made a post-Christmas purchase (treat to self). The Mio Fuse uses the same technology as the TomTom Runner Cardio (they are the company that developed it), and it pairs with my Garmin 620 using the same ANT+ technology as the normal HR monitor does. It does mean that I have to wear two bands on my wrist (the Garmin and the Mio Fuse) but when you like technology as much as I do that really doesn’t matter, and when compared against chafing and scarring then it is definitely preferable.

The Mio Fuse connects to other tech via both Ant+ and Bluetooth, so not only does it link to my Garmin but my iPhone as well so when I use apps like RunKeeper to track my runs it also feeds my heart rate to them. Â You can use it standalone as well, just tracking steps, HR, mileage and calories so if you just want a daily activity style tracker then it’s perfectly functional.

I am not a fan of the Mio iPhone app at the moment as it doesn’t sync with other sites or the cloud but the fact that I can connect the hardware with other apps more than makes up for it. Â If you are interested in wrist based heart rate monitoring then the Mio Fuse is well worth a look. Â Just be careful with the charger, I managed to knock off on of the tiny charging spikes whilst travelling back & forth to Basel but the Mio team were brilliant and quickly sorted me out a replacement (I now pack it much more carefully so it doesn’t get bashed about).