5 days on and the mosquito bites on my legs have just about stopped itching…..the sunburn on my calves is still providing comedy value for my colleagues though!

Last weekend was spent in a field at Hornchurch Country Park in Essex. I blame Helen….although I am sure the Boyf blames her more! She had suggested that some of the UK Fitness Bloggers crew should enter the Spitfire Scramble 24 hour race as a team in 2016, things rapidly spiralled out of control and not only were we signed up as a team of 8 to run in 2015 but somehow I had signed the Boyf to run it solo!

A few team member changes occurred over the period before sign-up as people broke & couldn’t recover in time but our merry band of 8 UK Fitness Bloggers (@Helsieboo, @knittingpenguin, @nairobiny, @plustenner, @PtMollie, @CoreyLearn & @lifemychallenge) plus associated families and friends converged in the aforementioned field. Some lucky people arrived on Friday in the rain (perfect British camping weather) but a hectic time at work (and the need for the Boyf to get a good night’s sleep) meant that we rocked up on the Saturday morning just as some of our intrepid crew headed off to do parkrun as a nice little 5km warm-up. Just what you need when you are planning on running a further 30ish km over the course of the weekend (each lap was about 9.5km). 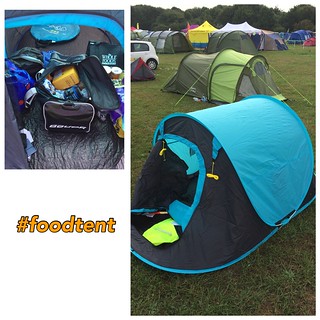 We managed to get our tents pitched…..food tent for the Boyf rated as easy (it expanded out as I opened the bag) but the main tent was a bit trickier. I am really glad we didn’t have to pitch it in the dark or rain! Thanks Sabine for helping us get it sorted.   It was really great to meet everyone in person as I had only met Alma before in real life. I think we were all a mix of nervousness and eagerness not only to put faces to names but also to get racing. Helen had prepped a race-order list with expected run times to keep us on track and over the course of the day we kept this updated with actual times so that everyone had a good idea of when to get prepped for their next lap. 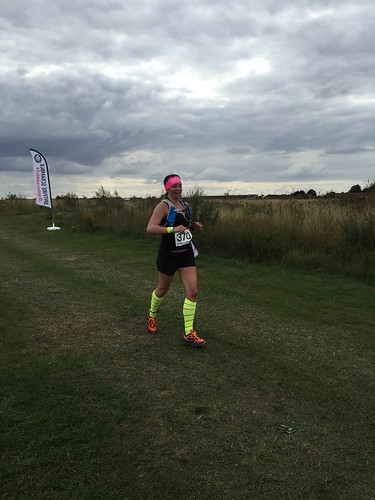 Corey had got us all some great headbands to wear and these really helped us stand out….regular readers will already know I have a love of bright colours as they can been seen from a distance and these meant you could spot your team-mate easily as they ran round the field to the handover point. They also helped the Boyf recognise people as they passed him on their laps once the race was underway. As a solo runner he was taking things at a steady pace whilst we were all bombing round at high-speed (it’s nice knowing you have 8 hours to recover between laps) but it meant he could spot friendly faces at a glance!

We were lucky enough to have some goodies to test whilst we were racing and for my first lap I wore the wicking t-shirt from Trespass. I’ve had Trespass clothing before for snowboarding and it’s been good quality and value for money. This shirt was no different. It was comfortable to wear and given the heat I felt that the wicking action worked really well. I was wearing my x-bionic Fennec top underneath as I like to have something compressiony on when I run but even with a dual-layer I didn’t cook. I was really impressed. I’m definitely going to make this one of my gym shirts as not only is it light but it has a zipped pocket in the side which will be perfect for holding my gym pass and my Techno-key for the machines.

I spent the day chilling with the team and flitting back and forth to the food tent to crew for the Boyf. It was great to see fellow parkrun friends as well. Neferpus popped over with Abradypus after their spot of voluntourism and Urglecom was there running as part of another team. Abradypus actually stayed for the entire weekend, looking after the Boyf in the darkest hours of the night whilst I was out running and it was marvellous knowing he was in safe hands when I wasn’t able to be there for him. All the team were so supportive of him and his solo efforts and I know we both really appreciated it. I also managed to keep myself hydrated with my Sistema Wave twist-top water bottle. This is now my water bottle for work because as long as I remember to close the twist top it reduces the risk of me spilling it over my laptop when I get a bit arm-wavey on my conference calls.

Helen had arranged the plan so that I did my 2nd & 3rd laps together in the dark. This really helped me with my prep for future races as I have a couple of night ultras coming up and then my big 100 miler in July next year. I used my Trespass lamp as a secondary light whilst crewing the Boyf but it wouldn’t have been strong enough for my run. The course was not lit except for the water station and there wasn’t much ambient light either (especially not in the wooded section) so I was glad to have my LED Lenser 7 with me. That lamp is amazing, it is so bright and the great thing is it takes 3 AAA batteries or the battery block that it comes with. This means if you are running all the way through the night you can easily swap power source if you need to. I also had my bargain 100 lumen mini handheld torch as well. I didn’t have to use it but it meant I had an extra method of blinding any non-runners should they choose to sneak up on me (thankfully no one did, but when you are running in the dark at 2am it’s better to be prepared!).

Shortly after my laps were finished the Boyf decided that after 12 laps he needed a break, so we headed to the tent and crashed for about 40 minutes. Then it was coffee time and a walk to the results tent to check how everyone was doing. 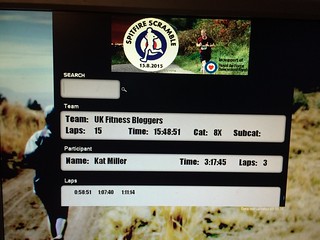 It was so cool having live updates throughout the course of the race. There was a screen showing live updates of times and positions of all the teams, pairs and solo runners which if you were part of a fast team meant you could keep track of your placings (we were slightly more relaxed about that side of things than some teams were!). You could also check lap times based on someone’s race number, this as great for me as it meant I could check the Boyf’s pace and progress each time he finished a lap. This was a huge help for me, especially for the laps when we were both out running and I wasn’t at the crew point.

He had pretty much decided to call it a day with 12 laps in the bag but Mike convinced us we might as well walk a lap with our coffees, there was still 6 hours left to go on the clock so off we went. We took it nice and steady but decided that 13 laps was more than enough. There was no real benefit in death-marching it to the end so instead we slept a bit more and supported my team as they finished off the race. I am so glad I had done all my running as it was really tough for everyone else pulling out a 3rd lap after another 8 hour break! Well done Teamies, you were amazing!

In the end we finished 31st out of 42 teams in the mixed 6-8 group. 23 laps in 24:15:55! This was my first 24 hour race and I loved it….thanks Helen for coming up with the idea and to everyone else for jumping on board and making it a really fun weekend!  I had a great time and I am really pleased with the times I ran my laps in.

Thanks also to those who supported me with free stuff to use as part of the race, despite this the views in the post are honest, open and my own.

If you want to read some of the other team members views of their time at Spitfire Scramble then here are some links for you: