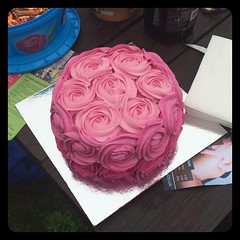 Sunday was runday! But first Saturday was parkrunday and we popped along to Malling parkrun’s first event. Originally I was planning to do Malling on 31st October when we would be in the area for Black Ranscombe but when Rosemary posted that she would be there to celebrate her 250th parkrun it would have been decidedly rude not to go along. Many of her friends wore African themed costumes at her request and it must have been a novel sight for some of the parkrun newbies or local run clubbers who were also there. 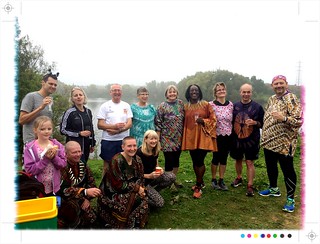 Malling parkrun is 2 laps round a lake, it is flat and the surface is solid underfoot. There are loos at the car park (80p for parking) and there is a van for bacon rolls, coffee etc by the start/finish area. The early morning waft of frying onions was amazing but I went for some of Rosemary’s celebratory cake instead. We headed home via Bluewater where I did some pre-marathon fuelling at Wahaca.

Up fairly early on Sunday to get pre-race prep (eating & plenty of loo stops) done we headed to the Lee Valley Country park, arriving early enough not to get stuck in traffic. As we were heading back to the car after a wander round to check on the water situation at the aid stations (water in bottles, energy drinks in cups), and make use of the portaloos (30 is not enough for a women-only race with plenty of friend & family support) , we bumped into Kate. It was Kate who had suggested this Race for Life marathon to me and as I was playing catch-up on the Boyf I figured it was a good time to close the gap back to 2 marathons difference. Unfortunately for Kate it wasn’ t to be her day and in the end she made the decision to drop down to the half….you can read all about her race on her blog. I lined up in the 4:30 – 6 hours wave and we were soon underway, I very nearly took out the group of photographers who had placed themselves right in the middle of the timing mat as I was busy hitting start on my Garmin and really wasn’t expecting large stationary objects in the middle of the flow of a mass start! It will be interesting to see if I feature in any photos in near collision positioning. 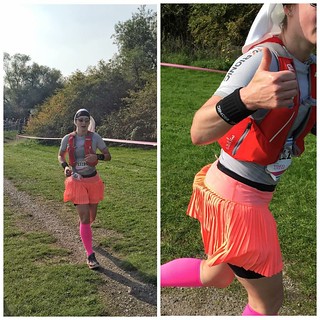 My plan for the race was to trial a run:walk strategy. The course was billed as primarily flat, with just one hill (done twice as the course was 2 half marathon laps). I had my Garmin Fenix 3 pre-programmed to alert me and 6 minutes in to the race I switched to a 1 minute walk. So may question why you would start walking so early on in a race but I wanted to do this scientifically and the idea is that by starting your walk breaks early you are able to stay fresher and benefit more than waiting until you actually feel tired. The course was pleasant with most of it being in the Lee Valley park, there was a stretch or two where you ran alongside a main road but it was on a path so there were no issues with crazy drivers. Thankfully there were also quite a few shaded sections. The weather was a lot hotter than I had hoped for (exactly the same as for Wimpole Half on the same weekend last year), but I felt that as long as I drank plenty, fuelled well and kept to my plan that I would be OK. It wasn’t long before I started taking two 330ml waters at the aid stations (3 miles-ish) apart and made sure I was drinking a few mouthfuls each water break. I was also taking an S-Cap every hour and over the course of the race I used 6 Push gels (one half an hour before the start), and a mini Soreen. It was the right strategy for the day, I didn’t feel like I hit the wall at any point and I didn’t suffer from parkrun-ear (what I term the slight ear imbalance I get when I run 5km without drinking and get dehydrated).

The run:walk strategy was going well and I freaked the Boyf out a tiny bit by the speediness with which I reached the half marathon point, all in all I was feeling pretty good at this point. The lazy cow in me had had a minor ponder of stepping down to the half as I was coming to the end of loop 1 but I reminded myself that not only did I want to make sure I finished my 10th marathon, but people had sponsored me for the run, and my friend Mel who had intended to run the race for a friend who had lost theirs to cancer couldn’t as she was injured. So I waved at the Boyf, threw down an empty water bottle and pushed onwards without stopping for a chat.

As expected lap 2 was much tougher, with the sun higher in the sky I was really feeling the heat but by now I was running in my soaked Legionnaire’s style hat to try and keep myself as cool as possible. A couple of times I deviated from the 6:1 ratio but not that much. The running was getting a bit slower but I was still ahead of the average pace needed to get a PB, so I kept pushing and moving forward.

One thing I did notice about the race was that the other runners were a lot less supportive than I was expecting. I’m quite a cheery runner and I try and give encouragement to others if I pass them or run near them but I am not sure it was appreciated. Maybe it’s because people were struggling or in pain (although I always find l like comments from others in the dark times), or perhaps they were focused on their own reasons for running a Race for Life marathon, thinking of loved ones etc. or perhaps it was just good old competitive nature meaning they didn’t like being over taken. Ah well, it seems that women only races sit with me in the same way as women only snowboarding events….I’m just not a fan. 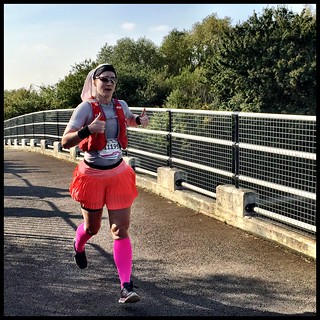 I slowly ticked off the miles and was glad to finally make it round to the 26 Mile marker, not far to go and I finally made it up over the bridge and sprinted (ish) for the finish line. The Boyf was most frustrated that the woman doing the announcement failed to read out my name and time as I came through the finish funnel….perhaps it was poor number placement under my pack fastening or perhaps I was just too speedy! He was generally frustrated by the announcements though, it would seem her choice of wording could have been better on a number of occasions. As he put it, saying “pretty much all of the runners out there today really deserve a pat on the back”…..erm how about all the runners!? Who doesn’t deserve a pat on the back? Those running the half marathon not the full? Those going slowly? Those who can still run at the finish?

Anyway….marathon 10 was completed for a new PB of 4:48:44….that’s 8 minutes 49 seconds faster than my previous best. Confirmation once again that despite the TrainAsONE training program I follow being lower in mileage than most off the shelf plans the way it targets your training really does get maximal improvement for the effort I put in. Thanks guys! It truly does pay to “Train Smarter, Not Harder”! 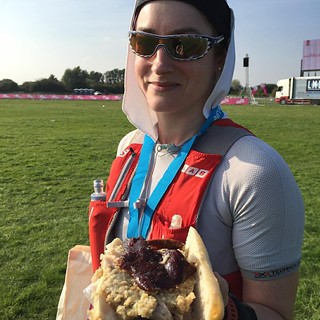