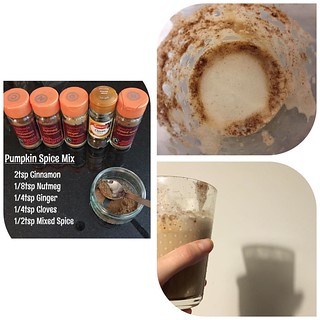 I kicked my week off by drinking homemade pumpkin spice lattes, but what do you do the week after you have run a marathon PB? (PB=personal best for the non-sporty among you).

I imagine this varies wildly from person to person. For a lot of people a marathon is a one off event, they run it and then that’s it, job done! Years of dining out on the fact they ran the London marathon (because it seems a lot of the one off-ers run London…..other marathons do exist) but they’ll never run again.

For others, things escalate in the other direction….it might not be immediate, it can happen by stealth and before you realise it you have run 10 marathons in 15 months and have 32 races of marathon distance (or longer) booked in.

So far this week, since I finished the Race For Life marathon in a PB of 4:48:44 on Sunday, I have run for 45 minutes and done 3 hours of yoga. My run wasn’t quite as fast as planned but in all honesty I wasn’t convinced I was going to manage 10 minute intervals at 5:20/km just 3 days after running my legs off. At least I went out and gave it a try, and it was a good opportunity to try out my new Skechers Ultra R trainers (very different from the Ultra 2, but at first test equally good). The yoga has helped stretch and unknot my legs, which is a good thing for the upcoming weekend.

Last Sunday’s marathon brought my marathon maniac status up to Gold level (3 stars) in the Marathon Maniacs club. This was because I had run 4 marathons in a 37 day period. This Sunday I hope to move up a level to Iridium (4 stars) by completing my first back to back marathons. This means I need to complete at least marathon distance in the Ranscombe Autumn Challenge races on Saturday and Sunday! This will be the first time I have done 2 marathons in 2 days but it feels doable as long as I eat and drink properly and don’t try and beat last Sunday’s time. Thankfully it’s a slightly lumpier course so it is much more suited to a gently paced plod then high-speed jaunt anyway.

What have you got planned for the weekend?