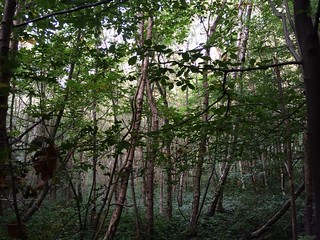 10 days ago I achieved Marathon Maniac Iridium status just as I had planned and blogged about in this post.  To do this I ran two marathons in 2 days, one Saturday and one on Sunday.  This is the first time I had attempted this feat and for someone who never meant to do run marathon let alone the 12 I have run so far it was quite a surprise.  My body didn’t break down and nor did my mind, all in all it really wasn’t a hideous experience.  This is probably not a bad thing considered I am signed up for two more back to back marathons (or doubles) in the next 6 weeks.

The races were the Ranscombe Autumn challenges put on by the SVN team, and it was my second visit to Ranscombe.  The first did not go to plan, I managed 2 measly laps and called it a day.  This time out I ran 7 laps on each day!  I say ran, there was a fair split between running and walking if I am honest.  Having blasted out a PB at the Race for Life marathon the weekend before I was planning on taking things a bit steadier, especially on the Saturday as I wanted to make sure the tank wasn’t completely empty on Sunday morning.  Ranscombe lends itself to this quite nicely though.  The first half of the 6-ish kilometre lap is a mix of flattish, a bit down and up, with the second half of the course having a really nice, long, downhill stretch with a bit of a climb back at the end.  This meant I was able to take things nice and easy but make up a bit of time on the downhills.   As ever Ranscombe was a friendly event, the SVN races always are, and it was great to catch up with people.  It was also really nice to spend some time running and chatting with @UltraBoyRuns (read all about his day here).  He and I first met at the Twilight races (he was ultra-ing in the same race as the Boyf) but didn’t realise who each other were (or that we were Twitter-friends) until we were both at home checking Twitter!  He had also convinced his friend @ChiltonDiva to come along as well, this was to be a bit of a prep/assessment race for her ahead of C2C in January.  The great thing about lapped races is you get to see a lot more of people than you do on a point to point, your paths cross more often, you lose people at the aid station and then they catch you up, and you get to have a good old natter!  Although I picked up the pace a bit in the second stage of Saturday and eased ahead of them both I was on hand at the finish to cheer them in!  @ChiltonDiva had made it to marathon distance and given she hadn’t run for 8 weeks I think she did a grand job of it….obviously hiking up Kilimanjaro helps with your fitness a tiny bit.   Refuelling took place at Wahaca in Bluewater and it was lovely to meet the GingaNinja and UltraBaby!  In fact probably the scariest moment all weekend was being in a restaurant at the same table as a real, live baby!  I shouldn’t have been worried though, as with all runners (even those that travel in a buggy) her focus was on the food and she was perfectly behaved.  Thanks for a lovely meal UltraFamily! 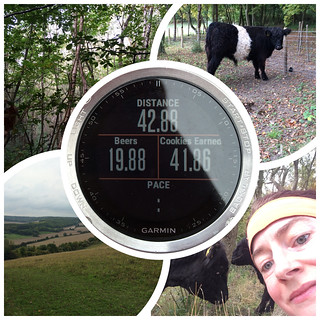 Day 2 dawned and I hit McD’s to get prepped for the day, coffee to ensure my stomach was in a fit state for another marathon and egg & sausage muffins for a good bit of fat and protein (I only had a smidge of muffin).  This was possibly the first error of the day (a few had probably been made the night before as well).  We headed over to the race site and got ready, Rachel started us off and away we went.  The Boyf had already commented that I seemed way to bouncy and un-achy as I whizzed round the hotel room getting prepped and I felt really good as we set off.  I was slightly achy but not in any pain, and thankfully things stayed that way for the whole race.  Where I did struggle though was just the empty feeling I had in my muscles.  I started on the peanuts after the first lap but as I was coming to the end of lap 3 I felt a real dip in energy, my vision all went a bit fuzzy and I knew a gel was needed.  I don’t normally gel on the lapped events but I really needed the pick me up and I felt better straight away.  I realised that whilst my body felt OK it just wasn’t as topped up with fuel as it needed to be.  I should have eaten the muffins as well as the eggs and sausage after all!  It rapidly became clear that the key to running marathons on successive days is making sure you fuel up really well after the first one.  I had eaten a good meal but it wasn’t enough to account for the lack of food I had eaten during the day on Saturday coupled with the calories burned by running.  I know that in theory I have plenty of fat to burn, but I also think my running heart rate probably doesn’t lend itself to an easy fat burn.  I really need to get tested to check this out in bit more detail.  I should definitely have gone for a Maccie’s milkshake like the Boyf did…..liquid calories are so much easier to squeeze in around the edges of the real food you have already crammed in.  Staying fuelled was a real struggle throughout Sunday.  I have learned on day two you need to eat twice as much otherwise it’s just a struggle.  Hopefully I can plan things a bit better for the next one, as ever this running malarky is a constant learning experience. 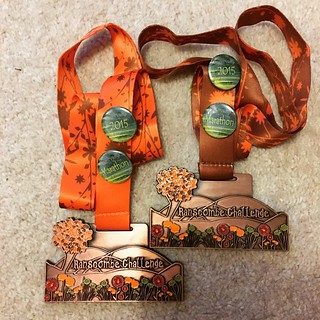 I survived though and was still running the downhills at a good pace even after I had hit 50 miles in a weekend!  Marathons 11 (6:16:46) and 12 (6:38:05) were in the bag and I wasn’t completely mentally or physically smashed…thank goodness for that!

Like the featured image? Make your own at veloviewer