OK, right up front let’s be clear….I didn’t do the ultra (the Boyf did though), I did however plan on doing the marathon….it was another epic fail on that front.  I did learn stuff though, so it wasn’t all bad!

We were originally going to be running a half marathon on Sunday 26th July, but we decided against it as it wouldn’t count towards the 100 Marathon club and hence was less relevant to our desires than when I had signed us up.  We were going to chill at home for the weekend, enjoy some relaxation and maybe have a light training run.  Then someone in our house thought there might be a void, so I had a look to see if there were any marathons we could run.  A Facebook poll ensued and we were roped into doing the Twilight Marathon, a first time event at a cyclo-park…flat and fast were mentioned.  I signed us up (mentally noting that the description included the word undulating) and all was good, until the Boyf decided if he was going to run 26.2 miles he might as well do 40 miles.  So after checking that we could upgrade him on the day we juggled our diaries once again for a 10am start instead of the 2pm marathon kick-off. 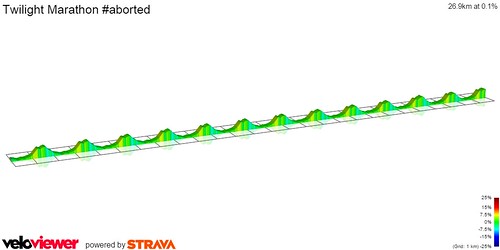 Race day dawned and we got there in plenty of time to assess the lovely view across London and the hills…updating Facebook I almost put off Karen & Philip who had convinced us this was a good idea in the first place but luckily they decided not to pull out.  I admit I was a bit nervous about the event as the last Nice Work race I did didn’t end well, the marshals were mean, they almost ran out of water and they did run out of medals.  I think there is a difference between those where Nice Work just take care of the timing side of things and those where they really take control of the event.  This one was great.  The team were lovely and really made us feel welcome.  I acted as support crew for the Boyf until my race started and they even made me a cup of tea whilst I was waiting!  There were 12 entrants in the ultra and they really seemed to look after them as well.  Basically a runner could place a food or drink order as they passed the aid table and as if by magic, a lap later a cup or tea, soup, sandwich etc. would appear! Distance-wise it was 31 and a bit laps for the ultra and 20 and a bit for the marathon, and they were not flat.  In all honesty the full lap was runnable including the hill but after multiple laps I am convinced that thing grew in steepness. My race started well but rapidly went downhill, and not in the “I love running down hills” kind of way.  The bottom section of the course was quite open and seemed to be a bit of a heat trap. I don’t like heat, it makes me very grumpy.  On went the water-soaked buff and hat but it was too late, I had under-hydrated and under salted and in the end there was no way back to rebalance it.  I kept trying to find the balance but after reaching the half marathon point I threw up twice, losing more water and salts.  Definitely a bad day at the office!  I headed out for one more lap to see if things settled, but I really wasn’t feeling it.  I couldn’t see that gutting it out for another 9 laps was going to be worth it for me in the end.  Yes it would count as a finish but I want my marathons to be well-earned not just walked to completion.  The Boyf passed me and I knew he was coming in for his finish….40 hard earned miles and it was at that point that my decision was made.  I was going to call it a day and wait for a better opportunity for marathon number 7.  The lovely people at Nice Work downgraded me to the half marathon though so I still got my medal and t-shirt. 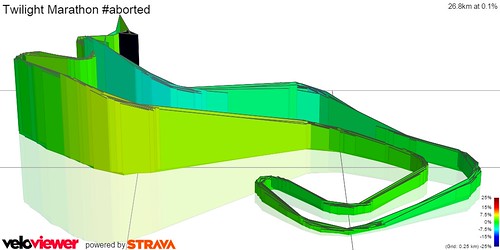 I don’t want to be a consistent quitter of marathons but I also want to make sensible decisions that leave me healthy and I think this was the right choice on this particular day.  What I have learned is that I must start drinking straight away, I sweat too much not to and I need to be S-Capping quickly as well.  Even if the day doesn’t seem hot I need to stay ahead of the game and I will continue to keep battling and refining until I get this right.

Positives of the day….The Boyf ran 40 miles (actually 42 when you take into account he wasn’t right on the racing line), his furthest yet!  He was also in a much better place than his outing at Ranscombe and seemed to manage his food, drink and electrolyte balancing act much better.  He too is a salty sweater as you can see here! Oh and even more important (so important I almost hit post without mentioning it) he came 3rd!

It was also great to finally meet @UltraBoyRuns…..of course we didn’t realise we had met until afterwards but that does seem to be the way of things with social media!  You can read his version of the day (plus some of his other exploits here)