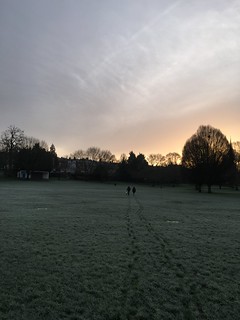 January 1st 2016 and we’re off on this year’s journey!  I’m not a fan of New Year’s Eve celebrations, I don’t really do parties and I am normally too tired to stay up anyway, so I finished 2015 with an early night in preparation for getting 2016 underway with a parkrun double and my first day of Janathon.  This meant the 6am wake-up call wasn’t too traumatic and I was able to have a chilled start to the day with a cup of coffee and a review of Facebook.  The Boyf and I then defrosted the car (glad we had a sneaky stock of de-icer for the first frost of the year) and drove over to Gadebridge parkrun.  New Year’s Day is currently the only day that you can run 2 parkruns and have them both count in your stats, so a lot of parkruns team up with others in the local area to allow people to double-up.

After finding the free car-park we headed to the start where my new Cow  Cowl marked me out as a tourist and we got chatting to a couple from Black Park who were heading over to Tring for the second run of the day.  Gadebridge is run on a mix of paths and grass and so it was a little bit on the slippery side, unfortunately the frost hadn’t been strong enough to harden the ground for us.  The marshals were friendly and encouraging as were the other runners, and we merrily wended our way over an undulating figure of 8 (ish) course, which was slightly undulating in profile.  The hills were runnable, but the mud meant it required a bit of extra effort to do so. A nice sprint finish (captured by the Boyf), and it was parkrun done in 33:50 & 53rd of 61 runners. 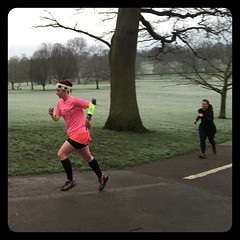 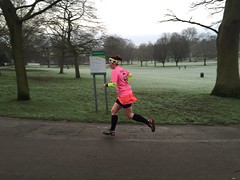 Back into the car and we headed over to St Albans parkrun, luckily arriving before the car park got full, where we had time for a breather in the car before we had to venture into the chilled Winter air again.  It wasn’t hugely cold, but I did manage to keep my arm warmers on for both runs today!  Run briefing complete we were nudged back and back towards the hedge to give everyone a chance to get behind the start.

It was a lot busier than Gadebridge (St Albans regularly has 300+ runners), and there were a LOT of run clubs present.  I couldn’t hear the countdown but spotted the speedy ones at the front head off and hit start on my Garmin.  The course is flat, and this meant I was running quicker than my planned 6:54min/km pace (sorry TrainAsONE), especially as it was so busy, you got caught up in the flow of runners and it was hard to ease off, especially as there were a lot of normal park users around as well meaning you were restricted on stepping to the side to let others past.  It was then 3 laps of the lake, a nice view, lots of ducks and swans, but very narrow paths and as the front-runners barged and shouted their way through on my first lap of the lake I was glad not to be on the water-side of the path.  I really didn’t fancy a New Year’s dip but certainly got the feeling that if I came between someone and their PB that I’d be paddling pretty sharpish.  Finally my 3 laps were done and it was back up the “hill” to the finish (total elevation gain of 10m doesn’t really count as a hill but that’s how it is known there……I advise anyone who thinks that is a hill not to visit Wimpole Estate, Tring or Lullingstone!).  31:12, 280th of 356 runners.  Whilst the lake view was nice I am afraid that St Albans parkrun went straight in at number 1 of my most hated parkruns list. Multiple laps, strong presence of multiple run clubs, lots of bad attitude and a high likelihood of getting pushed in a lake! It’s fair to say it isn’t on my re-visit list.

In addition to getting 10km in the log I also managed to get a few 30 Day Challenges underway.  So that’s 30 squats, 3 proper press-ups, 15 knee press-ups, a 20 second plank and some calf raises done and dusted.  I am also planning on squeezing in some yoga before bed.  So not a bad start to 2016, I am not expecting it all to go as smoothly but long may it continue.

Here are the course profiles from veloviewer: 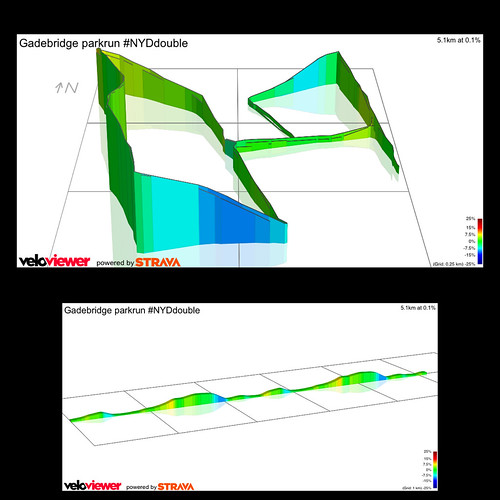 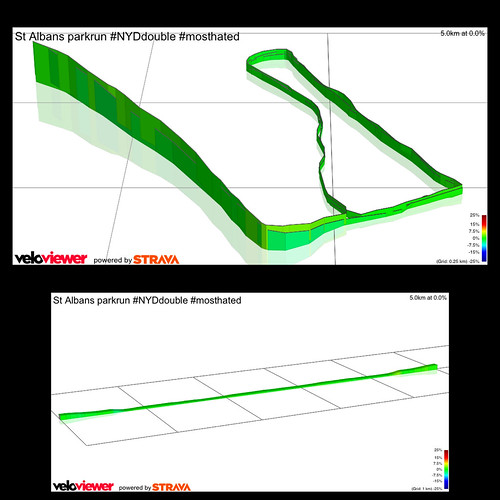